The “birding day” competition started officially at 5 pm yesterday and continued to 5 pm today. This was the second annual such spring competition in Anchorage, an Anchorage Audubon event designed to be done as close as possible to the beginning of spring. Teams form themselves and bird anywhere and anytime during that period, so long as it is within the Anchorage limits, which extend for probably 50 miles to the south of downtown Anchorage and 25 or so miles to the north. A lot of that terrain is mountainous.

Our team of 3 women, Louann Feldmann, Sue Westervelt and me (a subset of the previously organized “Twisted Listers” team, two of whom had serious issues that kept them from participating this year) decided to begin the competition south of Anchorage in the Portage area, head north to bird and eat dinner in Girdwood and finish the day owling in the Girdwood area, which we did. We were joined by Trapper Dan, who had a one-person team, for dinner and owling, which had also happened last year.

We had covered the same area in last year’s competition and were stunned at how many fewer species we got this year. Last year had been cold and sunny, and this year was cold and cloudy and eventually snowy in the Girdwood area. Yesterday’s birds for our team, in order seen, were Common Merganser, Black-billed Magpie, Bald Eagle, Common Goldeneye, Common Raven, Black-capped Chickadee, and Mallard. This year there were no birds at all at the feeders that had been swarming with birds last year. The road where there had been Boreal and Great Horned Owl last year had no owls at all this year, and in fact our team did not get any owls for the count. We got back to Anchorage about midnight.

We began today going to Arctic Valley Road where we had had Willow Ptarmigan last year. This year it was snowing so hard that some teams did not attempt the mountain drive at all. We got to the top but we were in 6-8 inches of new snow, with more falling heavily and we probably could not have seen a ptarmigan unless it had landed on our car. The snow continued all day and in fact is still coming down as I write this at 8:30 pm. I’m not sure how much has fallen down here in Anchorage but probably 6-7 inches.

We then visited a feeder that our Christmas Bird Count group had found in east Anchorage last year, where we added 6 more species today, nearly doubling our count total: Common and Hoary Redpolls, Red-breasted Nuthatch, Downy Woodpecker, American Robin and E. Starling. We were trying to act nonchalant about the miserable species list, not so secretly hoping the other teams were finding the same situation. Later in the day we saw another large flock of robins, which made the day seem a lot more birdy for a while.

We visited a couple more places, adding 0-2 species per new place. The new birds added were: Canada Goose at Spenard Crossing (where there were many snow-covered Mallards), Rock Pigeon and American Dipper at Ship Creek, Steller’s Jay in the Turnagain neighborhood, Northern Shrikes in the Point Woronzoff area and Boreal Chickadee (after a forced march so we could get there before 5) in the Campbell Science Center area.

At Westchester Lagoon, there was a small area of open water and more Mallards but no new birds for the day. The frozen lagoon and the little island that is so active when the lake is thawed looked even more desolate than they did when I visited there earlier in the week. 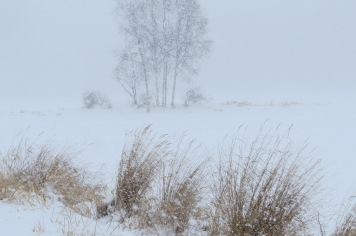 We also visited Potter Marsh before trekking to the feeders at the Campbell Science center but had no new birds there, and just saw one of the Bald Eagles guarding the nest (possibly the mate was on the nest), a Red-breasted Merganser, and Black-billed Magpies.

The result – grand total of 19 species for our team for the count, or about 1 species per hour of birding! When we met for supper tonight, we learned that all but one of the other teams had about the same number of species as our team, but our Anchorage Audubon president’s team had 29 species! Still about 10 fewer than last year. We all worked hard for our birds though and most of the hardy Alaskan types were so delighted that we were finally getting snow that nobody was doing much complaining. Skiiers were out and about and Alaskan winter was here for the day. Rumor has it that it will rain tomorrow and probably be above freezing and we’ll be back in slush and mud-land.

PS. Our need to find new birds for the day, especially owls, led to us getting a bit excited about a particular snowy lump on a post — maybe it was the back of a Snowy Owl?

123 species for the year