Winter, that is. This morning began with rain, cold rain, often heavy. By mid-morning, little snow flakes were coming down but melting on the ground. Even by 1:00 there was still not much snow on the ground up in central Anchorage, but down at our house (in the coldest part of Anchorage), the snow has stayed, and we’ve even had to shovel the porches. There will be more, undoubtedly much more before anything resembling spring occurs, but right now, it’s rather exciting to see the snow. 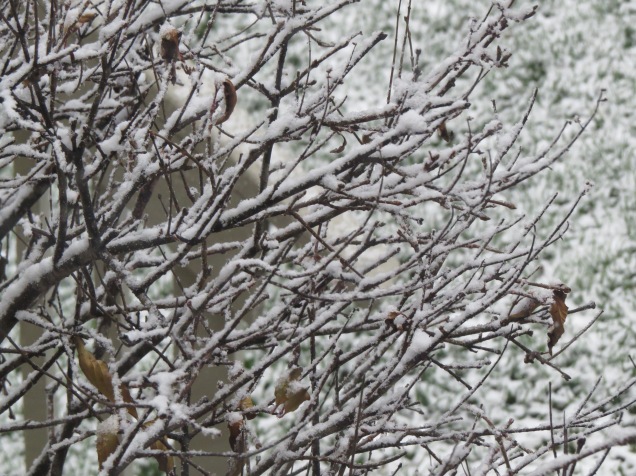 There were four unhappy-looking American Robins (or that’s how they appeared to me) in the deciduous trees on one side of our yard.

On the other side of our yard, our neighbor’s spruce trees look just like Christmas. 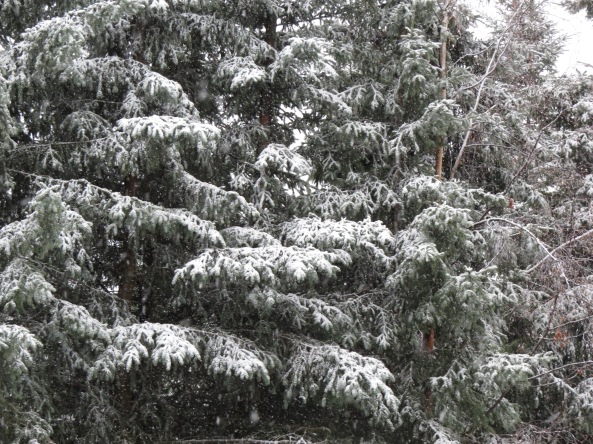 Tomorrow, I fly to Nome for my last scheduled trip for the year. I’m scheduled to give a talk there on Friday night about my Alaska big year (2016). Nome’s temperatures have been fairly similar to ours lately, but I don’t know what their snow situation is now. Depending on what birds are around in late October/early November (I’m curious whether any McKay’s Buntings, which winter in Nome, are there yet), I may come back for a quick trip in December to complete my year of checking out Nome’s birds. Spoiler alert: I’m having so much fun exploring Nome, I’m thinking of continuing this self-defined project next year. Stay tuned.

For the last week or so, my only birding has been to two trips to Potter Marsh, in our yard, and to various Anchorage lakes today on an Anchorage Audubon field trip.

Potter Marsh, still open since we have had few days even close to freezing, still hosts various ducks and about 20 Trumpeter Swans. Shown here are scenes (some leaves still on trees on October 11) and Common Mergansers and Trumpeter Swans. 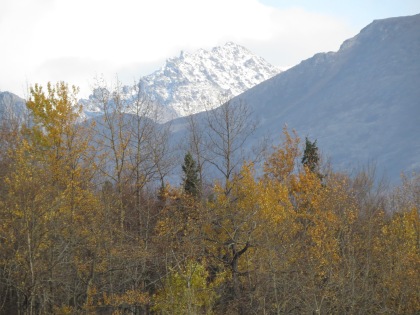 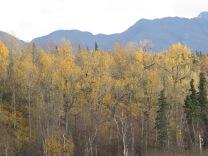 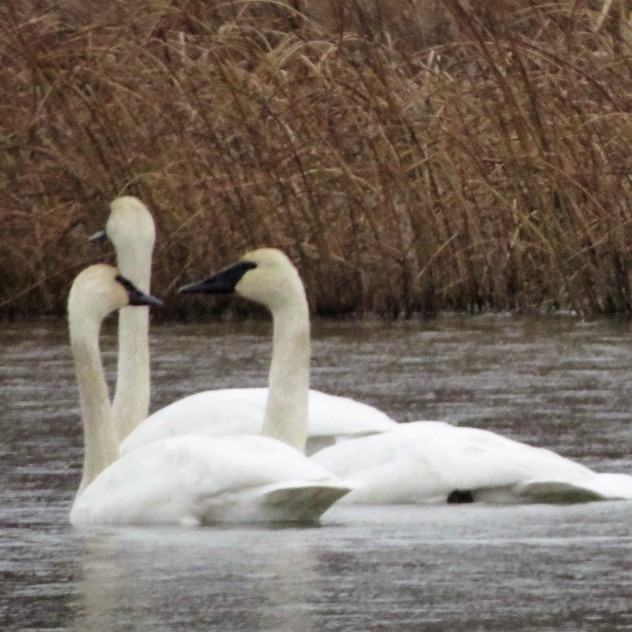 At home, the yard is usually empty of birds except for the usually-present Steller’s Jays and Black-billed Magpies. The skies are now wintery, often cloudy but sometimes the sun does show.

The home birding highlight is that Mallards (up to 22 at a time, so far this fall) have started to drop into our yard once or twice a day to scavenge under the bird feeders and eat the little bit of cracked corn that I periodically strew in the grass and put in a dog dish. Often a magpie hops close to them, apparently trying to figure what they are finding to eat. This is more than two weeks earlier than they began to come last fall. If they behave as in the past couple of winters, they will become more and more regular and more and more numerous in our yard until the snow disappears in spring. 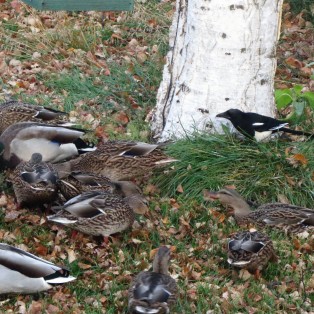 Today I joined about 12 other birders on the annual fall field trip, led by Andrew Fisher, sponsored by Anchorage Audubon to Anchorage lakes. It was a nice day, low 40s, but the chilly wind across the lakes made me realize how close we are to cold weather. 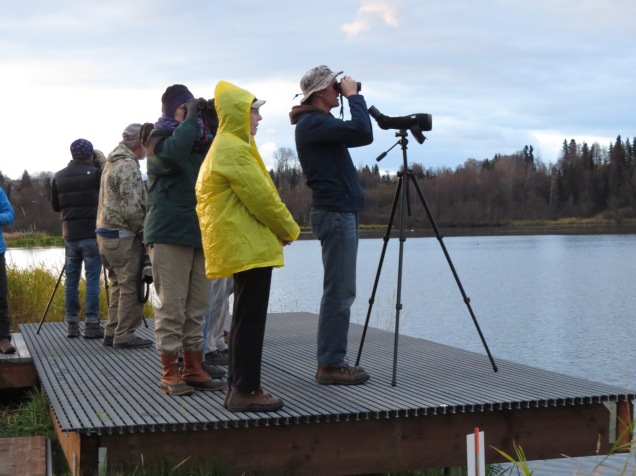 While there were plenty of ducks (both goldeneyes, Common Mergansers, Buffleheads, a few Canvasbacks, a few Northern Shovelers, American Wigeons, Gadwalls, scaup (mostly Greater), the clear highlight of the trip was two (!) Northern Goshawks, an adult and an immature, hunting the lakes. The latter almost got to keep the gull it caught and tried to take off the lake. The adult sat high in a large tree far across the lake after we saw it hunting.

The immature (gull hunter) perched in a closer tree at another part of Westchester Lagoon at Spenard Crossing. 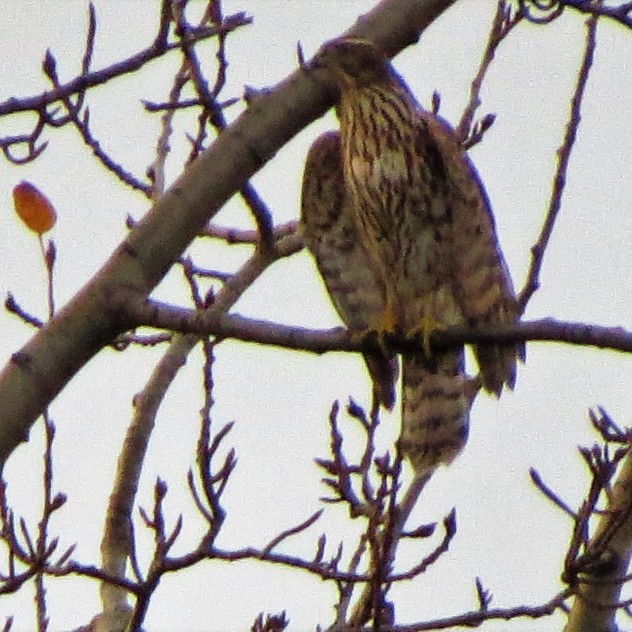 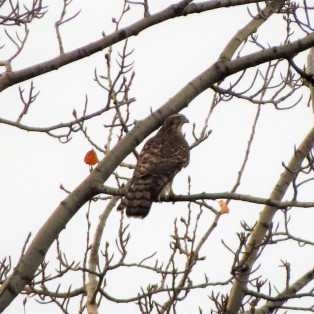 At Spenard and Hood Lakes there were mainly Common Goldeneyes and two White-winged Scoters far across the lake. Instead of trying for pictures of them, I took some pictures of the recently whiter mountains.

I  finished the trip by taking a short video of a plane taking off. Soon the lakes will be frozen and they will need to put on skis on the plane.

It was a cloudy morning as Dave and I drove up and down Arctic Valley Road today. The mountains, as always were beautiful. They still had some yellow colors and some of the mountain tops had sprinkles of white “termination dust”. We stopped every now and then for photos. The sun did appear briefly a couple of times, changing the lighting on some of the mountains. 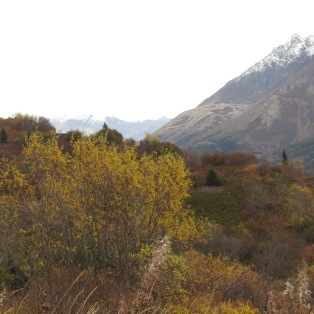 There were very few birds on the trip (about 14 miles round trip) – 2 Black-billed Magpies, four Black-capped Chickadees, one Boreal Chickadee, a small flock of Common Redpolls, a Common Raven, and a Northern Flicker, a bird I rarely see around here. The flicker flew past at one of our stops, briefly landed on a spruce top and was gone. 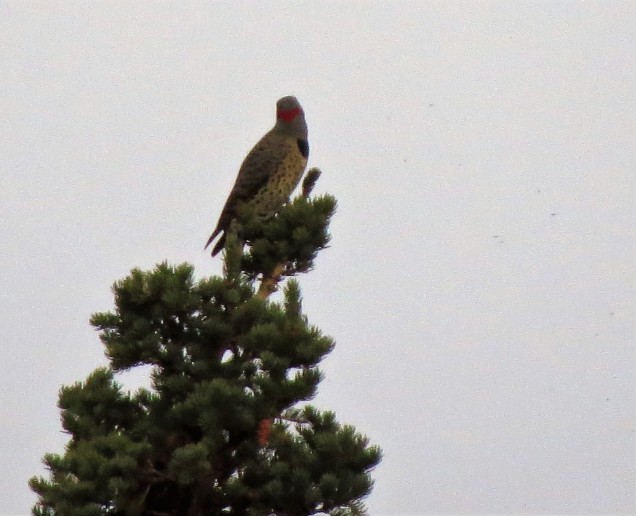 It is that time, once again to realize that maybe the season of Fall has to do with falling leaves (if you live in a place with trees with leaves). This is clearly the case at Campbell Creek Estuary Natural Area (Anchorage) where I walked a couple of days ago (and where I fell off the trail (don’t ask) and skidded and ran down a steep hill and then fell, like the leaves, to the forest floor and rolled to a stop at the foot of a lovely birch tree; my body, though not visibly seriously damaged, still aches all over). 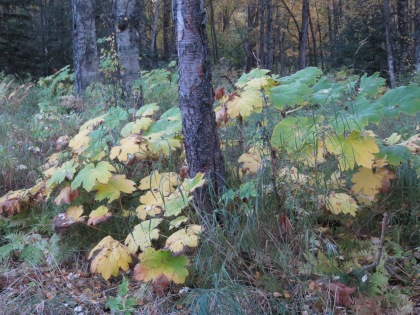 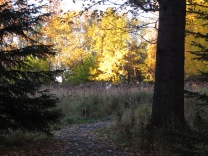 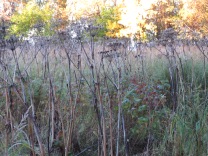 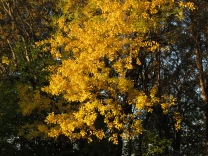 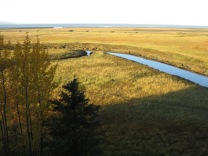 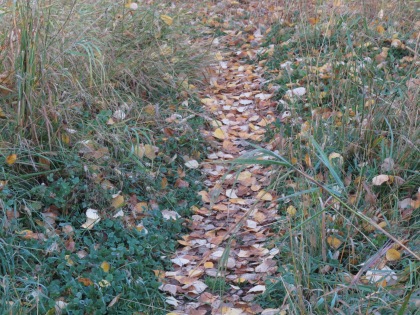 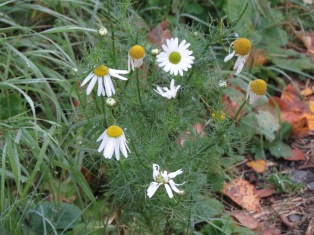 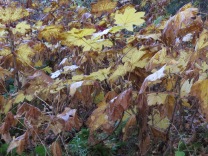 Yesterday I drove to Lakes Hood and Spenard, where the most evident birds were small flocks of Greater Scaup (no photo) and Common Goldeneyes, soon to be going, going, gone when the lakes freeze over, as will the single Red-necked Grebe that I saw (the dot to the left of the plane is also the grebe shown in the photo to the right of the plane photo). 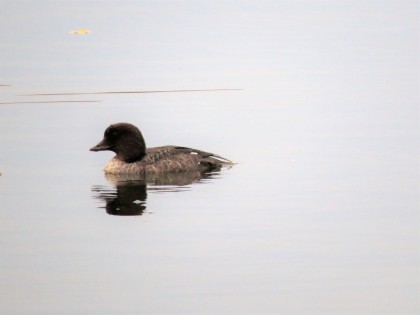 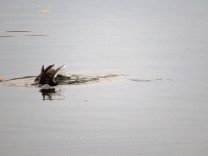 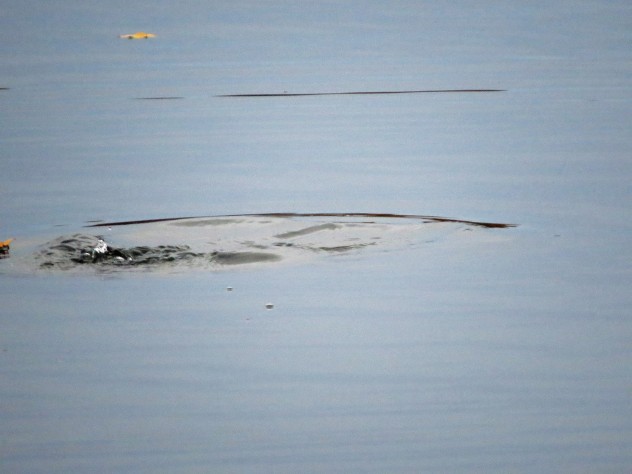 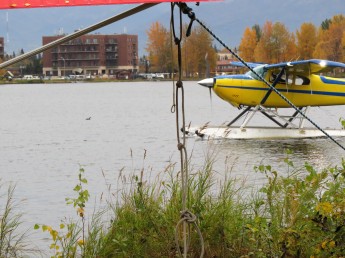 For those not familiar with these two lakes and how ducks (and other birds) and planes coexist there until the freezing of the lakes causes the waterbirds to leave, I am including the following video – note the ducks flying by at the beginning of the video and the ducks on the water behind the plane at the end of the video, never leaving, just moving as necessary when the planes get too close:

While the “termination dust” (first snowfall) is not yet staying on the mountain tops that we can see from our house, soon when I look out my window I will not see yellows. They will be gone, replaced by white. Of course, it will still be beautiful.