This blog is for anyone who is interested in birding. Although I now live in Wisconsin, and no longer spend my days birding in Alaska, I am still birding, much of the time. For a number of years, doing birding big years was my passion. I did my first big year in 2003 in Texas. In 2005 I did another Texas big year and observed 522 species (still the record, I believe). In 2008, I did an ABA big year and totaled 723 species. You can read about it in Extreme Birder: One Woman’s Big Year. After I moved to South Dakota in 2011, I did a South Dakota big year (350 species) and a couple of Pennington County big years. After I moved to Alaska in 2014, I realized that I needed the excuse of doing an Alaskan big year so that I could more thoroughly explore the birding wonders of the state. So, I did another big year in Alaska in 2016, and found 307 species, which was (is?) believed to be the state record. I wrote about comparing big years in TX and AK in Big Years, Biggest States: Birding in Texas and Alaska (2020). I also wrote and illustrated Birds in Trouble (2016). 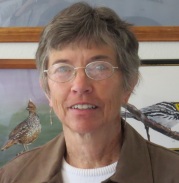