I am in Kodiak and I want to go birding. Unfortunately it is very dark and rainy and I have to wait. Before we left to take me to the airport, I had my husband take a picture of me, a “before big year” picture. Hidden in my luggage are of course binoculars, spotting scope, tripod, camera, small laptop and raingear. All will be used. It will be more than 12 hours before it is light out so I really should sleep soon.

My original plan was to spend the first two days of the year birding around and in Anchorage, and then to head off to Juneau and Ketchikan. Yesterday, however, Rich Macintosh posted on Facebook about the sighting of a Common Pochard on Kodiak Island. This is not a bird that I was expecting to see in Alaska ever, especially during my big year. While it may not remain around for me to find in the New Year, I have decided to give it a try. So last night I booked flights, room and rental car in Kodiak for the first two days of the year. Even if the Pochard disappears and is not around while I am there, Kodiak is likely to provide an unexpectedly rich beginning to my big year. It helped in my decision-making that I am not aware of any serious rarities currently in the Anchorage area.

When I did my ABA big year in 2008, I had an initial goal that I hoped was a realistic goal that I could reach without difficulty if I just kept on keeping on. That goal was 650 bird species in the ABA area for the year. When I got to 650 on August 1st, I revised my goal to 700, and when I got to 700 on October 24th, my goal until the end of the year was “just one more”. My final total was 723 species.

In the coming year, my goal is to just bird as much as I can in Alaska, trying to see as many bird species as I can see, one by one. For my 2016 Alaska big year, my initial (hopefully realistic) goal is 250 bird species. In 2015 (not a “big year”) I visited many of the Alaskan hotspots at least once and I reached 227 species in Alaska, so 250 should be possible if I just keep on keeping on and am more intentional about chasing rarities. Beyond that, according to eBird records, Brad Benter is currently at 273 species and I understand that others have reached similar numbers, so something in that range may be possible. We’ll see. Right now, 250 is what I’m thinking.

Meanwhile, I soon will be seeing #1 for my Alaskan big year, and then the fun will begin, one by one.

PS. For my thoughts on preparing to do a big year, go to the ABA blog for today (December 29)(blog.aba.org/).

This time I’m trying to put text around a photo or two, one of which of course shows birds.

These are photos this week taken from our windows in Anchorage. Winter is definitely here. All of the feeders are topped with snow, as are the branches.

The weather, while wintery is mild by Alaskan standards, today standing at just under 20 degrees. I understand, however, that there’s a blizzard off the west coast, so it will probably be much more like Christmas at Christmas.

At least the latest snow allowed us to get our new snow blower out for the second time.

In the middle of all the snow and darkness, it is good to periodically stop and see the sun when it appears. It actually does that every now and then. 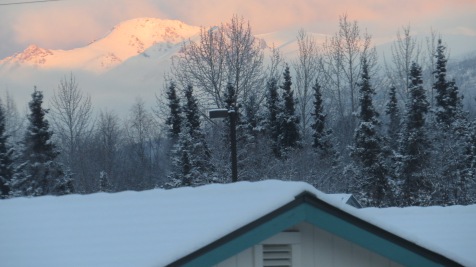 Planning takes a variety of forms. Until now most of planning for my 2016 Alaska big year has been basic review of birds that might be found in Alaska and where and when I might find them and lists. All of a sudden, however, I realized that January was almost here and I needed to be a bit more specific in my planning. I need to make actual travel plans, including actual reservations. The only ones I have made so far are for some of the must-go-to spring spots – Adak, St. Paul, Gambell, Nome. But there are 5 months between now and then, and lots of potential birds to see before then. So, yesterday I looked into flights to Juneau and Ketchikan, and hopefully tomorrow I will bite the bullet and commit to particular dates and flights. It’s always so hard because sure as fate as soon as I do that I will learn that I really need to be somewhere else then. The hardest thing about planning big years is balancing commitments, including getting a place on particular flights, with spontaneity (and more costly last-minute flights or lack of ability to get the flights that I want). The closer the new year gets, the harder it is for me to sleep as visions of birds (not sugarplums) dance in my head.

This would be a blog post about my birding adventures. Then I would choose the “Text” editor, and try to add the box. Sort of complicated to do but it appears to work.