This morning I birded out past the airport and then at Potter Marsh. It was a beautiful sunrise, both to the east as the sun came over the mountains, and to the west across the water with the mountains tinted pink.

Although I hoped to see the reported Short-eared Owl out by the airport, my bird sightings were limited to the more usual birds – Common Raven, three Northern Shrikes puffed up in the cold, a Bald Eagle, a small flock of Common Redpolls, a Black-billed Magpie and a Black-capped Chickadee.

Out at Potter Marsh, both Bald Eagles were first seen on the nest and then one of them flew low over me and the marsh. The only other birds at the marsh while I was there were a male Bufflehead sharing the small area of open water with two Common Mergansers, three Black-billed Magpies, one of which was carrying a huge beakful of grass, and a Black-capped Chickadee. 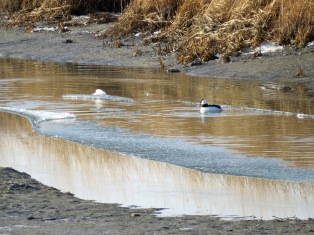