I cannot (usually) tell a lie – sometimes I play tapes of bird calls and songs. And I did so on the night of March 14.

The plan had been for Aaron Bowman and me to go owling for Western Screech-Owls in the Portage area south of Anchorage, but Aaron found at the last minute that he was unable to go. So, about 7 pm with a beautiful sunset in my rear-view mirror, I headed out on the 50-mile trip. After a brief stop for gas, I drove the road toward Portage glacier and turned in at a fish-observing parking lot that leads to a campground (not yet open for the year for camping). 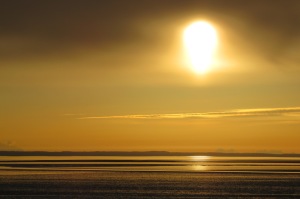 As I opened the car door I heard the melodic song of an American Dipper. At the fish observing area where the water was gushing past were two dippers chasing each other around, the song telling me where they were as they passed back and forth beneath the little bridge where I stood. A couple of times I was able to see them in the half-light when one of them landed and before it dove under the water. 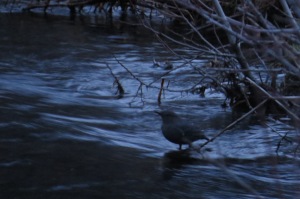 I packed up my flashlights (two, in case I dropped one), camera, binoculars, and phone and walked down the paved road into the camping area. A beautiful half-moon in the clear sky meant that I really did not need either flashlight, even though I stayed until a little after 10 pm. 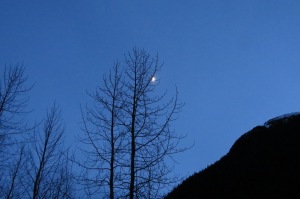 I did not play the taped owl calls continuously or very often but about 9:00, when it was still quite light out and I had just played a few seconds of call, I glanced around, and there was a small WESTERN SCREECH-OWL staring down, silently silhouetted, from toward the top of a very close deciduous tree!! The bird’s head was sort of squarish (as opposed to the more round heads of Boreal and Northern Saw-whet Owls) and seemed to have little bumps at the two upper corners of the head – the “ears”. I tried to get a picture but as I was fumbling with the camera, the owl silently glided over my head and was gone.

After that I walked the campground for another hour, mostly listening to the total silence and the very quiet sound of flowing water. Only a couple of times did I hear what were probably distant owl calls, but none of them were clear or loud enough to tell me for sure what they were. It is a very strange thing to see, but not hear, an owl at night, a strangely incomplete feeling. Perhaps the silent owl was a female owl checking to see if a mate had arrived or perhaps it was too early in the season or in the night for owls to begin calling. Maybe Aaron and I will go back to check it out.