On this trip to Nome I took too many pictures and saw too many birds (as if there is any such thing as too many birds) and have decided not to do a detailed discussion of the trip. There’s just too little time to even begin to tell a coherent story about the trip any time soon. So, for now, I’m going to try to content myself with showing a few highlights. Perhaps I’ll periodically show a few more as the days go by. We were delayed in departing Anchorage for a day, due to not enough visibility in Nome. I spent the first three (it should have been four) days as part of a Wilderness Birding Adventures group wonderfully led by Scott Hauser and Aaron Bowman.

The last three days I birded mostly on my own, taking time to try to nail down a few decent shots of a Bluethroat, which we had seen from a distance on the first day. I now have become very familiar with the unbelievably variable, yet still repetitive song of the Bluethroat. Following are few of the many photos of one of three Bluethroats that I found on Kougarok Road on June 7th, concluding with a song sampling. All three birds were singing and doing their aerial displays as I drove slowly by. Two of them didn’t sing for long, but the first one kept going energetically for about at least two hours, as I photographed it. It flew up and then landed on a couple of prominent shrubs and sang, over and over, sometimes quite near me, where I stood as motionless as I could (should you be interested I did NOT ever play a tape to start or prolong their singing). 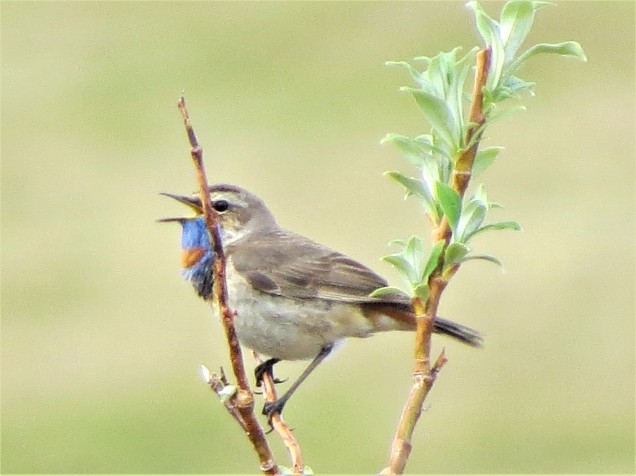