It didn’t rain today (or snow)! The temperature ranged from about 41 to 50 degrees, with a sunny sky and a modest wind. Not only was it a good day to go birding, but I also had time to do so. So, I went to the Potter Marsh boardwalk. The surrounding hills were mostly covered with snow. The grass was mostly brown, but there were still many yellow leaves on the deciduous trees.

As expected, there were not too many birds remaining. There were about 8 Mallards, 12 Green-winged Teal, a single Common Merganser quite close to the boardwalk, a fly-by Black-billed Magpie, periodic views of a Bald Eagle, and the sound of a Black-capped Chickadee. 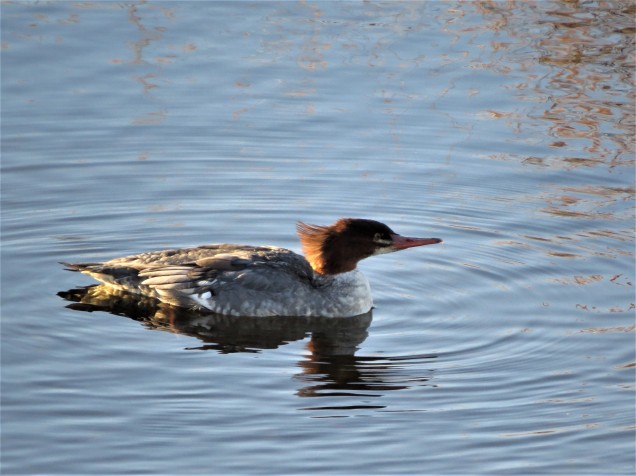 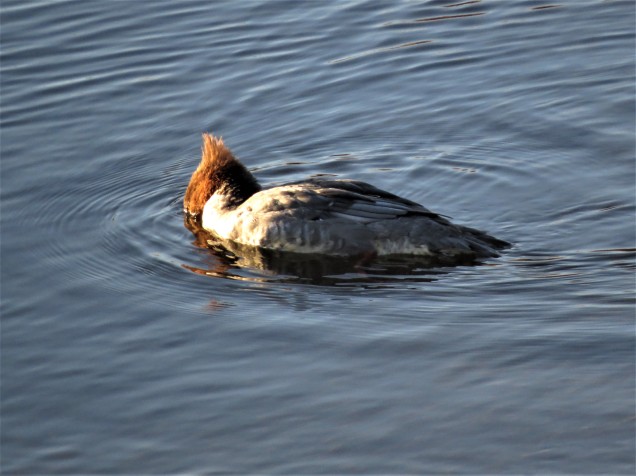 When I drove the highway along the marsh, I found that there were still 4 Trumpeter Swans around, each of which was accompanied by Mallards waiting for the swans to bring up something from underwater.

I wonder if there will be snow on the ground at our house when I post again.

We left Homer in the rain on October 3, but the rain was not continuous and the drive had long stretches without rain. 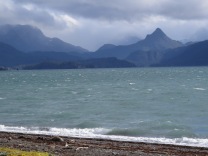 Some of the higher mountains along the way had very light sprinklings of snow on top (“termination dust”), but down below where we were it was clearly still fall and not winter. At Tern Lake, about halfway home, we stopped to photograph swans and scenery. 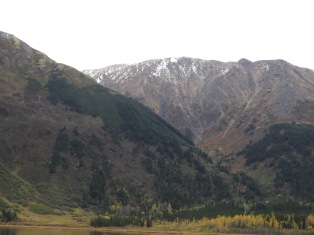 Now back in Anchorage, the rain of the last couple of days has produced serious termination dust on the mountain tops, as viewed from our living room.

It’s time to change over to studded tires and prepare heart and soul (and car) for winter.

It’s an unheard of vacation for me when I just stare out the window and don’t even venture forth to look for birds. I have been pleasantly lazy. With the wind and the waves and a bit of rain, the birds just kept coming to me today! I tried to take pictures of most of them as well as of the overall view. Note: because of my weird computer, it’s possible there are two copies of my kittiwake video in this blog post; I just can’t seem to delete the one that inadvertently inserted between the scene pictures below. 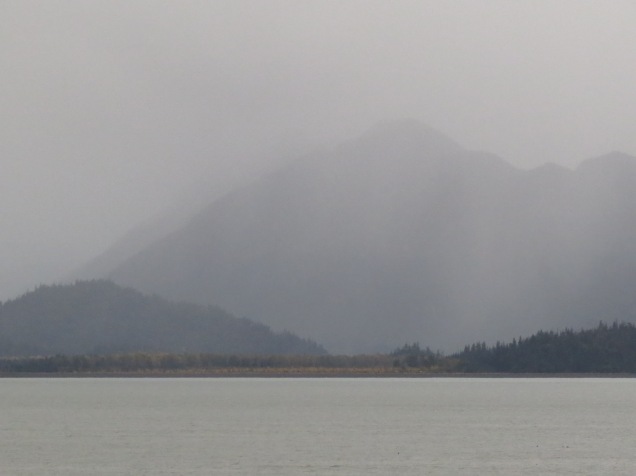 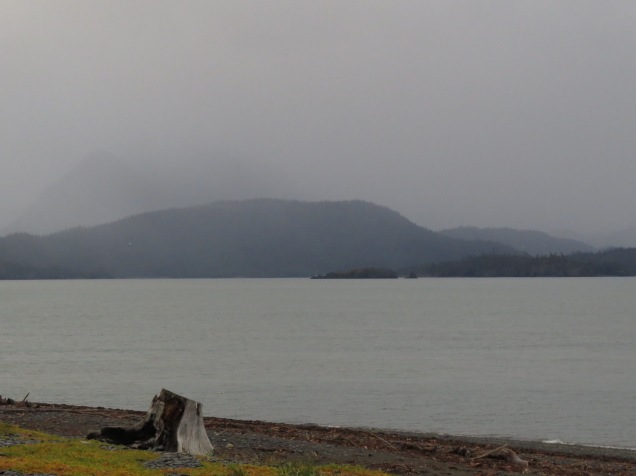 The best bird photos from today are below, but because of the distance, most birds, though recognizable, are a bit fuzzy. Seen and photographed (parentheses are numbers seen, but I wasn’t staring out the window all day so there undoubtedly were more) were: 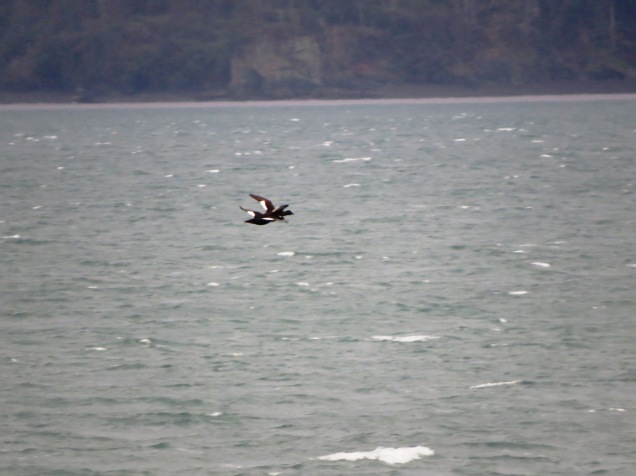 Black-legged Kittiwakes (80 or more, often in swarms with other gulls, none of which I worked at identifying when they were so far off shore):

Not photographed but seen: Harlequin Ducks (3) and Bald Eagle (1).

Also photographed from our window: the state ferry and a smaller freight ferry (we think that’s what it is, taking on a couple of passengers): 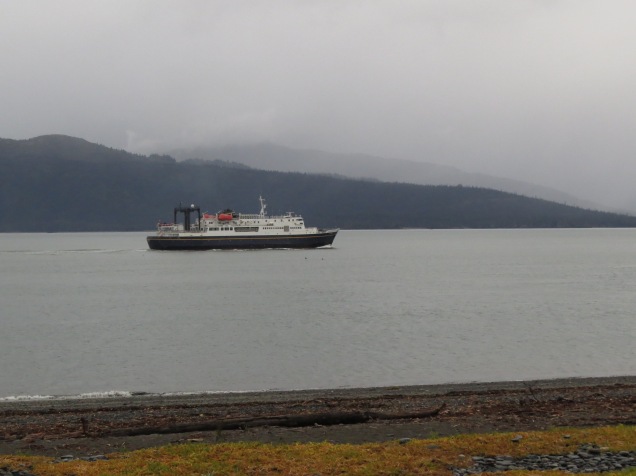 It will be sad to leave Homer, but I’ll be back!

Yesterday morning, before the clouds and fog were too low and before rain was in the forecast, I drove the spit and went to the Beluga Slough Overlook. The Northern Goshawk was still harassing the ducks and the two Trumpeter Swans took off from the water and then returned. 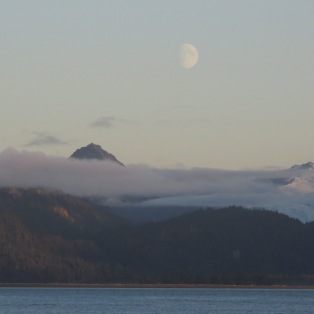 While I usually don’t have many birds at the overlook, this afternoon when I went back, the little birds were very active (Boreal and Black-capped Chickadees, Brown Creeper, both kinglet species and Pacific Wren – pictures of first and last below):

This morning, in fog so thick I could barely see the road, I drove north to Anchor Point. By the time I got there, most areas of fog seem to have lifted at least around Anchor Point. It was a beautiful crisp (37 degrees) morning with only a bit of wind (now, tonight, it’s foggy again here in Homer with increasing wind). The mountains across the inlet were lovely when visible. 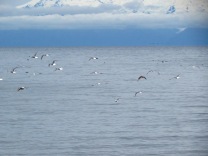 I walked along the beach to the mouth of the Anchor River. Mostly there were Glaucous-winged Gulls, Northwestern Crows and Harlequin Ducks.

There were also a few Common Loons, Red-breasted Mergansers and distant scoters on the water. Two Bald Eagles watched me walk by, periodically talking to each other or to me as the sun tried its best to break through the clouds. 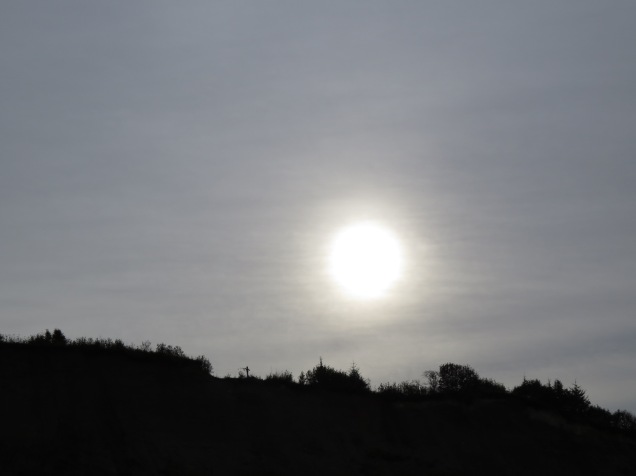 At a little wet depression there were three Wilson’s Snipe and a single dowitcher, which eBird says should be a Long-billed Dowitcher. Seems right to me. I couldn’t get any closer to get better pictures. Any thoughts? 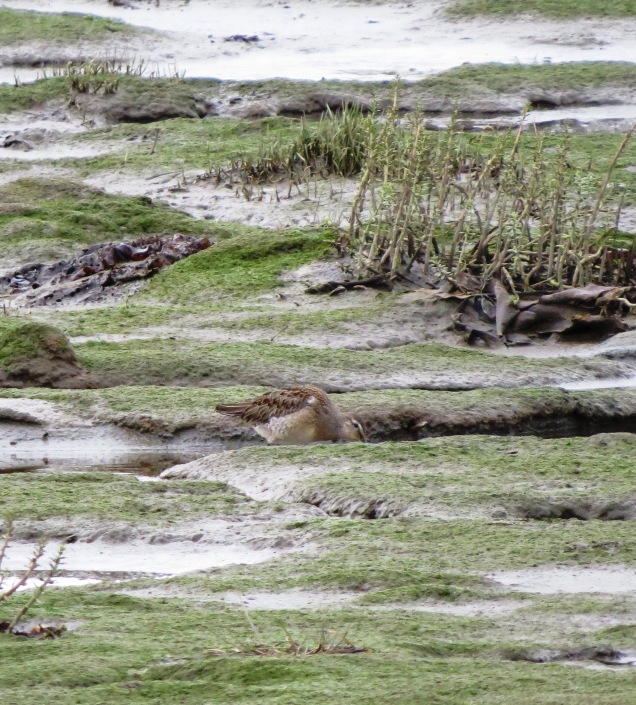