I arrived back in Anchorage last night. No time to bird today, so I’ll try to begin to catch up from my time in Gambell where I did not have access to the Internet.

I birded on this trip with a Wilderness Birding Adventures group led by Aaron Lang of Homer, Alaska. The group arrived in Gambell at 1:50 pm on August 31st and started loading our luggage on the cart to be taken to the “lavender lodge” (the purple-painted house where our group stayed this trip), but when we heard that a “good” bird had recently been seen, we changed plans, unloaded the cart and were transported by it down the side of the airport along the lake where a GRAY-TAILED TATTLER was casually wandering along the pebbly shoreline. Unbelievable – a new year bird within 20 minutes of landing on St. Lawrence Island!!

After that we walked to our abode, the home of one of the Gambell residents. A bit of food and we were off to walk the far boneyard where a redpoll was all we found. Near there, however, were a couple of Northern Wheatears and a couple of White Wagtails. Snow Buntings flitted up on the slopes, and higher up various alcids (Least and Crested Auklets and both puffins) flew about. Some of the baby alcids missed their goal landings from the cliffs into the water and were rescued by the birders. No matter when we looked out on the sea, we saw many Short-tailed Shearwaters passing by, sometimes singly, but more often in continuous streams.

For those who are not familiar with Gambell, it has three main boneyards, composed of holes in the earth, lush fall vegetation hiding many of the holes, and bleached white bones of animals killed in days gone by that protrude randomly from the dark earth. Little birds that happen to get to St. Lawrence Island are generally found (if at all) by birders who “walk the boneyard” in a line, trying to avoid breaking a leg while trying to be constantly on the alert for a little bird flitting up out of the greenery as the birders’ approach. 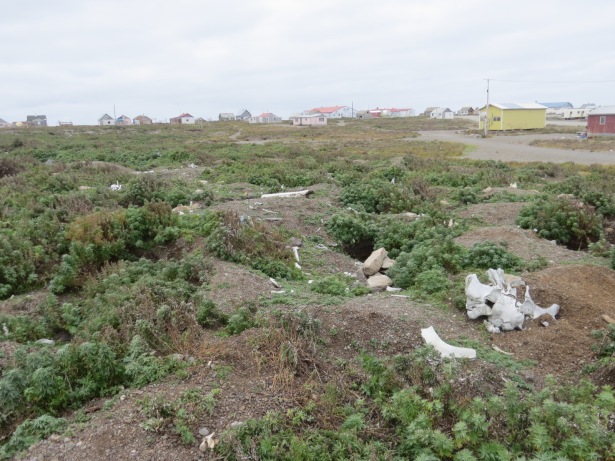 In the evening on the first day we did a seawatch to the west/northwest, seeing many Short-tailed Shearwaters, both Horned and Tufted Puffins, flyby Harlequin Ducks and gulls, and Ruddy Turnstones on the shore.

September 1st was much windier (sadly, from the north) but we valiantly did a morning seawatch, and walked the far boneyard and road to the north, before a leisurely lunch. In the afternoon, three of us walked the eastern shore of Trout Lake. Often we made a gull-stop, which allowed me to catch up to the longer-legged walkers. We did have a Crested Auklet very close to the shore (also seen the next day even closer to the shore). 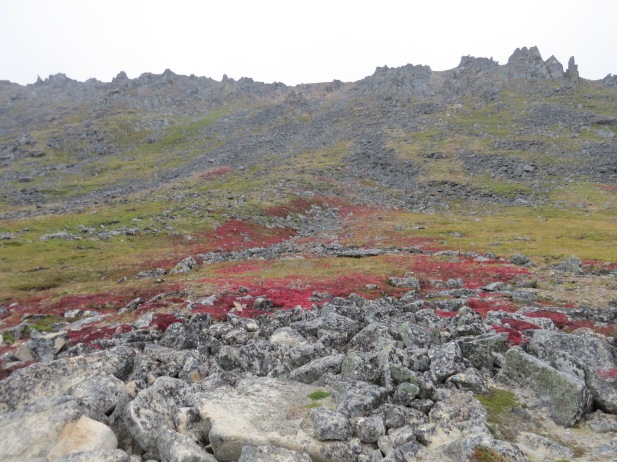 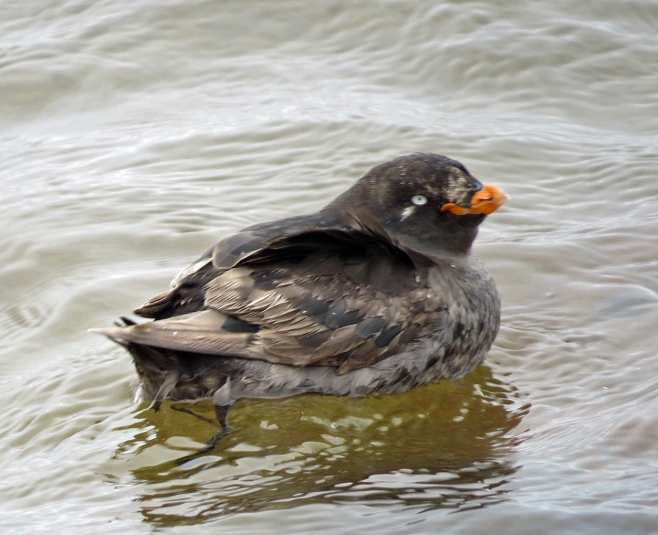 Highlights on September 2nd included more Ruddy Turnstones and Red Phalaropes in the morning and a distant Short-eared Owl in the afternoon (one of about seven that I understand had been around the south end of the lake). 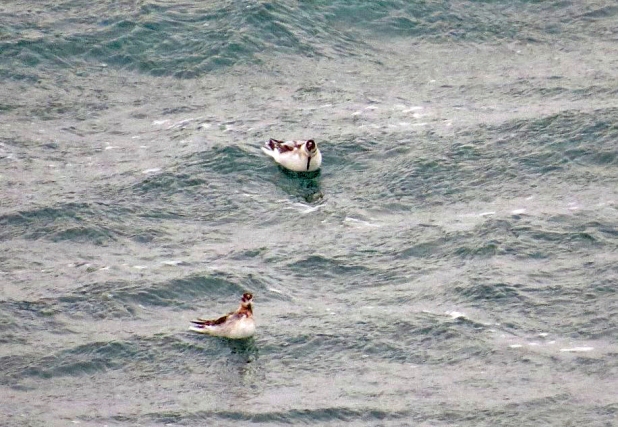 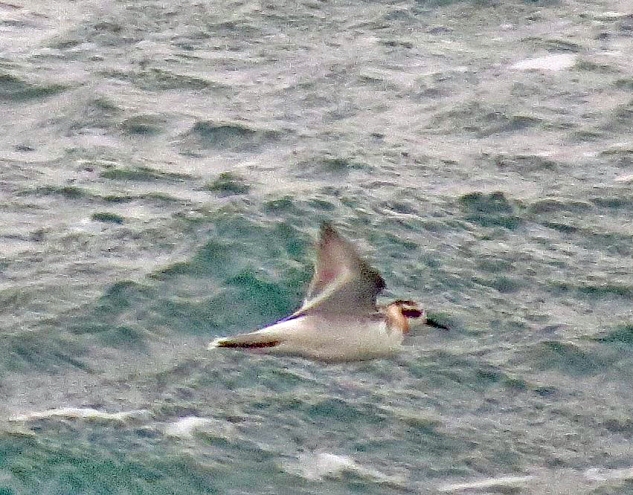 September 3rd (Saturday) was a bit balmier and even had a bit of sunshine.

I finally added another bird to my year list, SHARP-TAILED SANDPIPER, the second new bird for the trip. Some of the other birders at Gambell had seen one earlier, but this bird stayed put in the vegetation at the corner marsh and was photographed by anyone interested in doing so. It was still there when we went back later in the day.

At a little wetland termed the “white house” was a handful of Ruddy Turnstones, a juvenile Long-billed Dowitcher and one of the many White Wagtails found at Gambell. Snow Buntings, usually skitish, stayed put in the little pond where they were bathing. 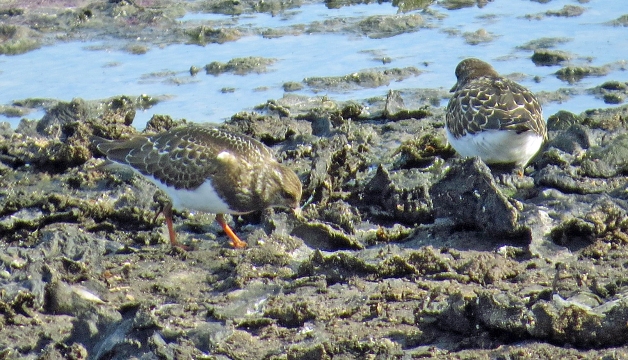 Sunday the 4th had increased wind, still from the north, which is a bad direction if you are hoping to see Asian migrants arrive at Gambell (the latest forecast was giving us some hope of a change in wind direction in mid-week). We did see a Fox Sparrow on the rocks above the far boneyard among the Arctic ground-squirrels but no other new island birds.

The wind was even stronger on September 5th. To compound the trip-drama, when we woke up in the morning, the house was very cold – the heater had run out of fuel. Since it was Labor Day, the store was not open so no fuel could be purchased. Our landlady’s son found fuel somewhere by late morning so the heater was restarted and the house gradually warmed. Most of the birders went out for the morning seawatch, but did not participate in the usual tromp at the far boneyard. Too windy. The usual birds were seen out on the ocean. Shown below are a Pigeon Guillemot and Black-legged Kittiwake.

Tuesday the 6th was windier, from the north. Most birding was in the form of seawatching since it was nearly impossible to stand up and walk the boneyards and at the same time try to find birds. Birds were unlikely to be there anyway, probably having been blown off the island. There were Pectoral Sandpipers at a couple of wetland areas.

The 7th dawned a little less windy but still from the north. After the usual morning seawatching and boneyard surveys, most of our group went down to the south end of the lake. On the way down the lake, White Wagtails, Snow Buntings and many little voles entertained us as we looked for new arrivals to the island. 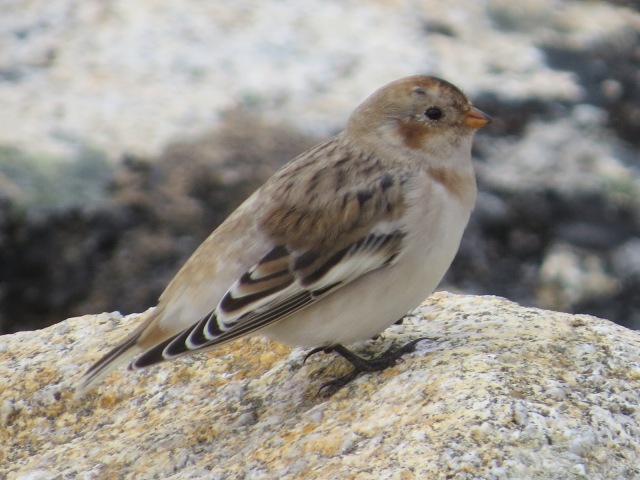 We had just located a couple of pipits at the south end of the lake, one each American and Red-throated, when a message came on the radio that a Siberian Accentor had been found in the far boneyard. We scrambled on to the cart and were bumpily and rapidly conveyed to the boneyard, where we scrambled up the mountain behind it to learn that the bird had disappeared up the mountain somewhere. We were told that we needed to give the bird time to get itself back to the boneyard so we cooled our heels for an hour or so and then re-tromped the boneyard. Nothing. So, we headed off to supper, with plans to reconvene at the boneyard at about 7:30 pm. By about 7:45, others saw, and then I saw, a SIBERIAN ACCENTOR! And then we found that there were two of them, which posed for numerous photos on a rocky area just past the far boneyard along the base of the mountain, the third and final new year-bird for me for the trip.

The next morning we all saw one of the Accentors in the same area and more photos were taken. One of the Accentors was seen on the 8th and 9th. But there were no new birds for my year list on those days, nor for most of the lists (year, island, life) of any of the other birders on the island. As predicted the wind slowed and shifted to the west/southwest, but that did not seem to produce any better bird results, although a few species arrived or were first seen during that period that were not new for anyone’s lists (more Pacific Golden-Plovers, Pectoral Sandpipers, Ruddy Turnstones; a possible second Bluethroat; more Sharp-tailed Sandpipers; 3-5 Short-eared Owls). Even though the bird species did not grow more exciting, it was always beautiful and enjoyable to be out birding. 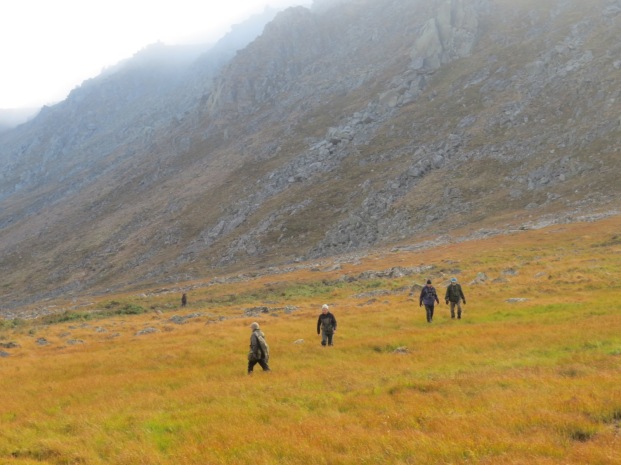 Our group was scheduled to leave in the late afternoon of the 10th, so there was not much chance for more vagrants, but I was resigned as the 9th ended. The low number of birds gave time for appreciating the beautiful sunrises (on the days we saw the sun) and the neat plants growing all around us. We had a brief moment of hope when a mysterious bird was sighted at the far boneyard late on the 9th and we all raced out there to check it out, but an American Pipit was what the mystery turned out to be.

Our group was entertained throughout much of the trip, out in the field and where we stayed, by an engaging little dog named Grizzly that accompanied us on many of our forays. 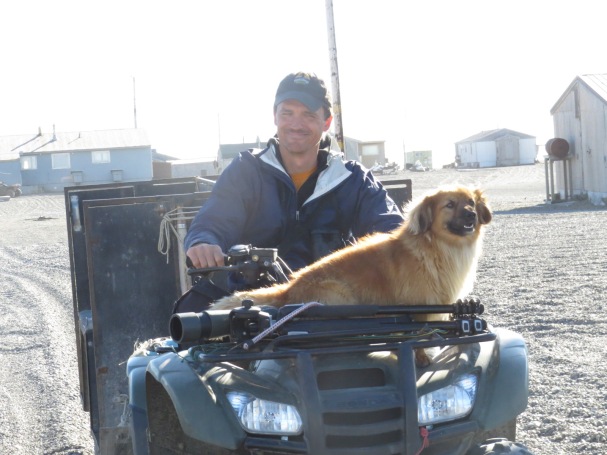 It was an excellent trip with great leaders, great companion birders, great food, and a few great new bird species. Now I have a few days to work in Anchorage before I head to St. Paul Island.

One thought on “September 11 – Report from Gambell, August 31-September 10”