Last night Steve Heinl, Louann Feldmann and I searched for Barred Owls, which others had reported calling in the Ward Lake campground north of Ketchikan. That’s where I had looked for hours the night before without any luck. Last night it was raining but we valiantly wandered around the wet campground, down the trails, on the road -nothing. Finally after over an hour, having retraced our route without success, we decided to drive farther down Revilla Road to listen in other areas.

We had only gone a very short distance in the dark rainy night when Steve spotted a big owl sitting on a road sign! I did a U-turn and the bird was still there. It flew a short distance to a close-by cliff and perched. In the light of my flashlight we could see it clearly – a black-eyed BARRED OWL! Use your imagination on the crummy picture I was able to take in the flashlight’s light before the owl flew off. While we watched the owl, another distant Barred Owl was calling, the first we’d heard. We decided it must be a family group, and maybe the owl we were seeing was a young one, unaware that Barred Owls don’t usually sit on roadsign signs. 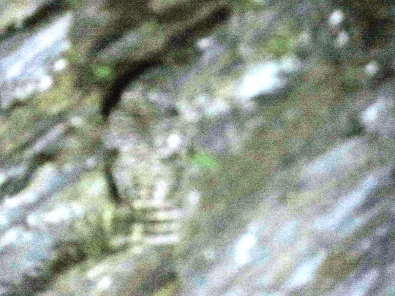