I am back in Anchorage after day 3 in Nome. Today we drove much of the Teller Road, about 100 miles round trip. The bush-sized willows along the road held many singing warblers, including Northern Waterthrush. We also saw a couple each of Willow and Rock Ptarmigans, a Whimbrel and other usual western Alaska birds. There also was a herd of about 25 Musk Oxen, which I understand have been reintroduced to the area. 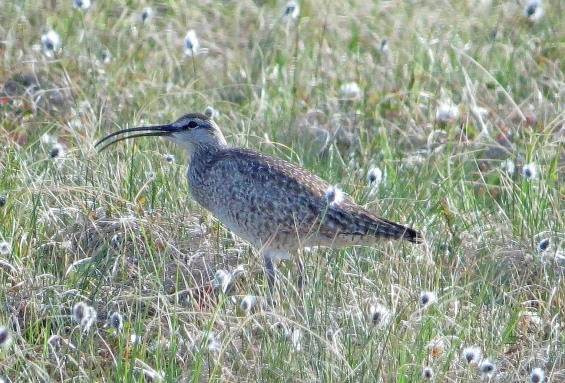 My goal for the day was Red Knot which I was told has a breeding area somewhere along the road. After a little over 30 miles on a lovely, somewhat breezy morning drive, we took a steep bumpy sideroad, stopped and did a walk across crusty tundra covered with tiny flowers. Right away two HORNED LARKS flitted away, never to be seen again. The walk up the gentle incline did not produce any Red Knots, so we turned around and headed back to the road. Just as I was asking Aaron Bowman what the call was that we were hearing and he was replying that it was Pacific Golden-Plover, there was another cry – that of a RED KNOT in the distance. I recognized it because Aaron had played it earlier as we drove to the area. Our whole group walked in the direction of the call and finally found the bird. The Knot then disappeared and we thought it was gone until I refound it in an every more photogenic location.

Following are pictures taken in Gambell of a Red-necked Stint, leaders Aaron Lang and James Huntington, Eye-browed Thrush, Red-throated Pipit, Common Greenshank and one of the boneyards that we searched regularly for birds.