Today’s weather was cloudy without rain for the first couple of hours I birded, but then the rain set in again. I started the day looking for Mountain Bluebirds but did not see any. I did see a Greater Yellowlegs, Song Sparrows (so rusty-colored that I spent some time trying to identify them as something else), and Yellow-rumped and Orange-crowned Warblers. 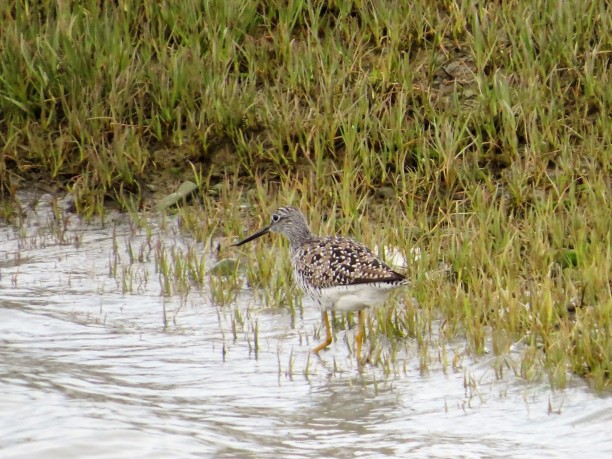 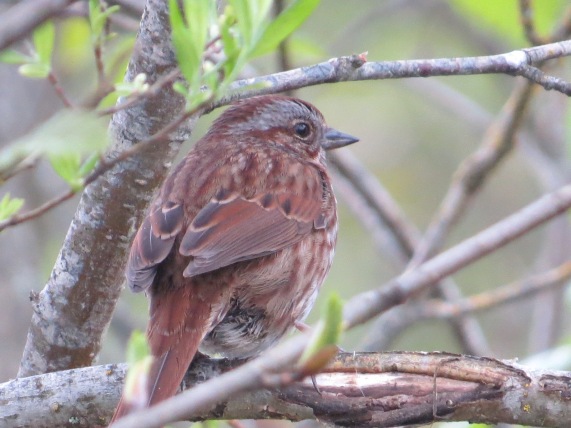 I then drove north again to the Eagle Beach area. Unlike yesterday I arrived there at high tide and all the ducks were much closer to the overlook. I scanned the little flock of Green-winged Teal, but it was just teal. I looked around the wetland at the other ducks (pintails, wigeon) and geese (Canada Geese and one Snow Goose) and then looked back to find that the Green-winged Teal flock had grown, and even better, that it now included a male CINNAMON TEAL! Even though the Cinnamon Teal was sort of embedded in the flock of Green-winged Teal, its darker cinnamon color made it stand out. 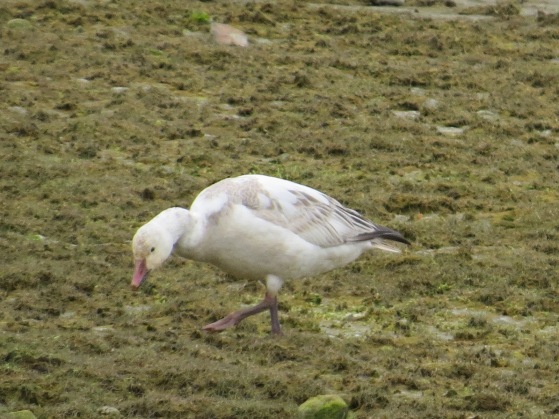 I was about to call Bev Agler to tell her about the teal when she called me and we arranged to meet with Patty Rose for more birding. Before we headed out, however, we looked out her

The three of us headed over to the Mendentall Wetlands which by now were getting wetter by the minute.  Undeterred we took our scopes and headed out across the mud and grassy areas. For a while we birded with Gwen Baluss. As we trudged along we found that the flock of Canada Geese that we encountered included at least one tiny goose, a CACKLING GOOSE.

Little flocks of shorebirds were scattered across the flats, including LEAST SANDPIPERS and WESTERN SANDPIPERS, as well as Lapland Longspurs and American Pipits. Later Gwen saw a Horned Lark, but I did not see it. Patty found a group of Black=bellied Plovers which then disappeared but finally we relocated at least one BLACK-BELLIED PLOVER.

In the evening I went back to Eagle Beach until almost dark and watched the tide and the birds come in, but I did not see the Marbled Godwit that had been seen there a couple of days ago. Tomorrow I take a quick trip to Ketchikan and then I’ll be back in Juneau for a couple of days.

3 thoughts on “May 1 – Cinnamon, Rufous, and Shorebirds”