The plan for today was to go up to the hawk watch about 120 miles north-east of Anchorage. Louann Feldmann and I drove about half that distance this morning in the rain before we ran into heavy snow with very little visibility. Realizing that the rest of our trip would be further into the snowstorm, higher up into the mountains, we decided to turn around and try for hawks and Golden Eagles another day when we had enough visibility to see a flying bird.

When we got back to Palmer (about 50 miles from Anchorage) we explored a couple of areas, including various fields that sometime harbor Sandhill Cranes when the cranes have come to town. No cranes today. After that we drove the road where I got my first (and only, so far) Northern Harrier for the year. Today there were at least two immature Bald Eagles that seemed to be aerially playing when they weren’t being harassed by a noisy Northern Shrike.

There were also at least two Trumpeter Swans that flew around and finally landed near us.

We then went to Reflection Lake, which I had never visited and which, although still mostly icy had reflections in the water pooled on the ice. We walked the trail around the lake and I got to view the vastness of some of the Palmer Hay Flats from the high observation tower. We were very lucky that the rain stopped just long enough for us to do the walk and then started up again when we got back into the car. 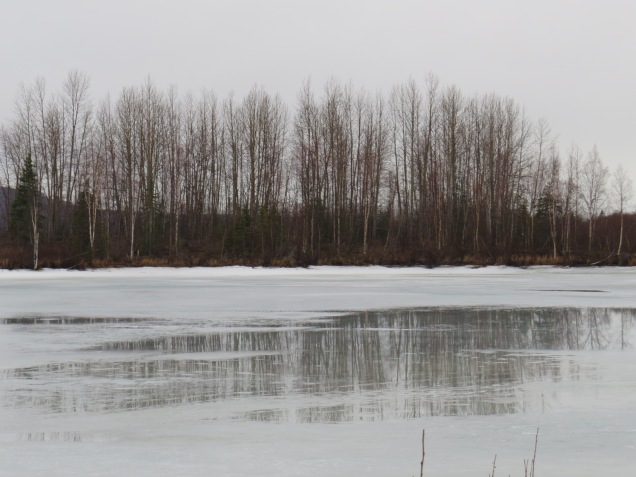 After I dropped Louann at her house, I explored a couple of areas in Anchorage. At the Campbell Creek Estuary Natural Area it was quite windy but again the rain stopped long enough for me to walk all the trails. There was another Northern Shrike there, plus the usual Common Ravens, Black-capped Chickadees, a Bald Eagle and a distant gull. When I checked out Lakes Hood and Spenard I found that they are still completely frozen over, so no waterfowl there.

On the road near Point Woronzoff and past the airport, there was only a single Common Raven and a single Bald Eagle, both of which were sitting soddenly as the rain poured over them. My view of the city of Anchorage across the inlet as I ended my birding for the day was a bit obscured by the rain. 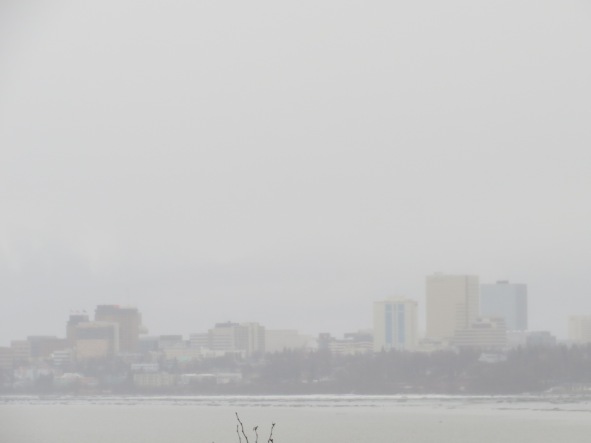 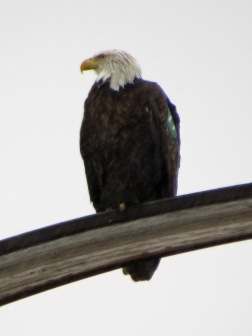 One thought on “Mar. 28 – Palmer and Anchorage Wandering”