Throughout this trip to southeast Alaska, rain has threatened every day and periodically briefly happened and mostly not been too noticeable, until today. Today it just rained. Still, I was out there birding for most of the day. I began at the Mendenhall wetlands a little before 8 am. I did not have any particular goal, but it did seem like it would be a good time and place to get my first snipe of the year. Those of you who have read my first book (Extreme Birder: One Woman’s Big Year) know that I like to write doggerel “poetry”. Please skip to the next paragraph now if you do not like to read it. As I walked along I was happily singing (to myself), “Just walking in the rain, getting (not quite) soaking wet, wish for a snipe, the next bird I should get.” There were very few birds along the trail, but there were a couple of Common Goldeneyes, Northwestern Crows, Bald Eagles, Canada Geese, Buffleheads, American Wigeons and Song Sparrows.

I did not see a snipe today. Instead I saw another long-beaked bird. Bev Agler and Patty Rose had arranged to meet me at the wetlands about 9:15. The three of us hiked out across the wetlands, where I not yet gone before. Eventually we reached an area where Patty had seen the earlier reported Long-billed Dowitchers. Without two much effort we spotted the two LONG-BILLED DOWITCHERS again today, feeding side-by-side along a little rivulet. 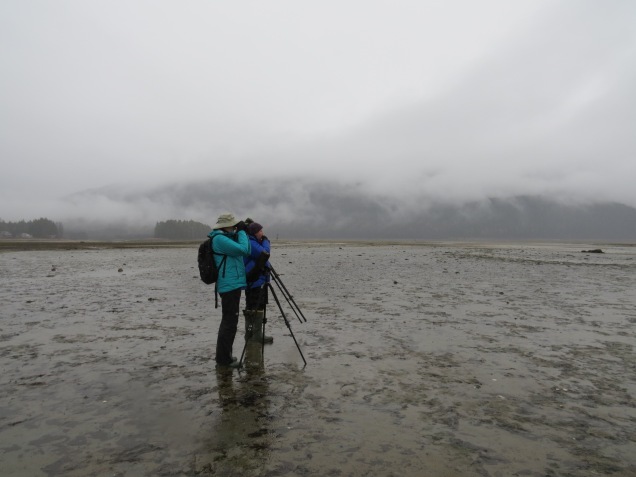 Mission accomplished, we hiked back, unsuccessfully scanning the Mallard-Wigeon flocks for something other than an American Wigeon.

After lunch, we headed over to Sunset Point where a Snow Goose has been hanging out with the Canada Geese. Normally (apparently) it has been visible from where one can park a car, but today many of the Canada Geese and the SNOW GOOSE were way out across the grassy puddle-full field. Having nothing else in mind to seek, I decided to slog out toward the geese and attempt a picture. Although I could not get very near the geese because of slippery mud ahead of me and because I needed to go back to avoid high tide, I did get a couple of distant photos. 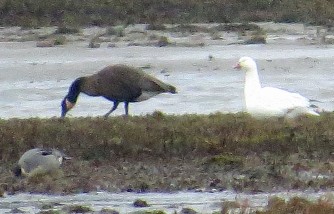 Late in the afternoon I visited the Brotherhood Bridge area, which is a good birding site during migration and just pretty and not birdy on a rainy February day.