The forecast was for rain all day, and it did rain some, but not enough to discourage birding. Much of today I birded with Steve Heinl and Jim Lewis. We basically drove the length of Ketchikan, first north and then south of town.

Our first goal was KILLDEER and we found six of them at Mud Bight north of town, and later another one at Bayview Cemetery.

Nearly everywhere along the water were flocks of gulls, often wildly scrambling for herring. Among all the Glaucous-winged Gulls were quite a few Thayer’s Gulls, a few CALIFORNIA GULLS, first for my year and for Ketchikan for the year, as well as a couple of Herring Gulls. We checked out Knudson Marina, saw the American Coot again, as well as close-up views of Marbled Murrelets. We also had many Common Murres, Surf Scoters, Red-necked Grebes, goldeneyes, six or more Great Blue Herons, and a couple of Song Sparrows. 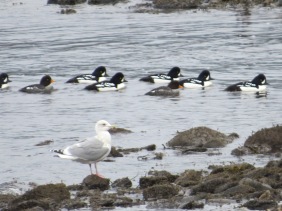 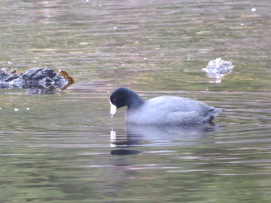 South of town we saw many more gulls, Pelagic, Double-crested and Brandt’s Cormorants, and a Red-winged Blackbird and Varied Thrush together with five Song Sparrows. Along Ketchikan Creek, which was running high after all the rain there were 3-4 Amerian Dippers, at least one of which was singing loudly.

A great day of birding. Tomorrow I will be birding in Juneau.