This afternoon I flew south down to Homer from Anchorage, a flight of about 45 minutes. Because the flight was delayed, I was worried that I would not get to Homer when it was still daylight. Aaron Lang had agreed to let me come look for the White-throated Sparrow that has been coming to his feeder for a long time if I got in before darkness descended. Between the time of making these plans and my arrival, however, he learned of a Brambling that was coming to feeders of the Craigs in Homer, so the plan changed to try for that first, assuming I got in before it was too dark.  Although I saw a Brambling 16 years ago in Alaska (the data for which I have not yet entered on eBird), I have tried many times since then without success.

As the plane flew along, I took pictures out the window of a landscape that I had never seen from the air, although I have driven from Anchorage to Homer a couple of times. I figured that if I did not get in in time to bird, or if I did not see or photograph any birds, I could at least post pictures of the snowy world that I saw today.. 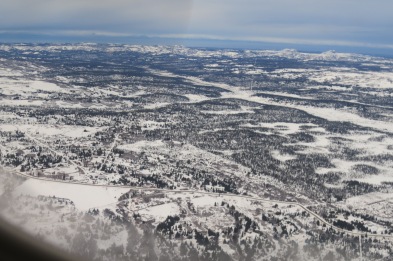 When the plane got to Homer, it looked like we might have time to check for the Brambling before it got too dark, and so Aaron drove me to the Baycrest Hill area of Homer. Michael and Peggy Craig welcomed us in, and pulled out chairs in front of their back window overlooking the area where juncos and the accompanying Brambling periodically made a visit to eat seed scattered on the grass. Within about 5 minutes, the juncos and a BRAMBLING arrived, as well as a couple of Black-billed Magpies. Although the lighting was a bit low, both Aaron and I were able to get a couple of photographs before the birds flitted off and it was too dark to expect them to return again anymore today.

Tomorrow Aaron and I will hopefully see his White-throated Sparrow and bird more around Homer. There are a few other possibilities that might also be added to my year list in the Homer area. We shall see.