I watched my yard birds in the morning and waiting for it to warm up at least a little. My usual Common Redpolls, Pine Grosbeaks, Dark-eyed Juncos, Black-billed Magpies and a Steller’s Jay were out and about in the cold frosty air.

In the early afternoon, I ventured out to the Chester Creek Trail where Aaron Bowman had told me that White-winged Crossbills had recently been seen by someone. Although these crossbills were everywhere in Anchorage during the winter of 2014-15, I had not seen one all this winter, nor had I seen any reports of others’ sightings of them. So I walked about a mile, seeing Black-capped chickadees, Pine Grosbeaks, a Common Raven and a Black-billed Magpie, but no crossbills. There was a distant flitting flock of something that could have been what I was looking for, but possibly not. If it had been a bit warmer I might have continued farther along the trail, but not today.

To warm up, when I got back to my car I drove the nearby neighborhood where I had done the Anchorage Christmas Bird Count. This is where I had looked for robins numerous times this year (having seen them there on the CBC) without success, and where we had seen a Merlin (still needed for 2016). Today, probably because I no longer needed robins for my Alaska big year, I found about 40 robins at and under two different feeders. Although this neighborhood like many others in Anchorage has spruce trees, none of them harbored any crossbills that I could see nor did I find a Merlin.

I decided to head home, but before I did, I checked my emails and found that about an hour earlier Thede Tobish had seen a Cedar Waxwing near his house in the neighborhood where I had seen my single robin yesterday. While Cedar Waxwings are regularly found in southeast Alaska in late summer, they are rare in Anchorage and not a bird that I could assume I would see this year.

So, I changed direction and headed over to try for the waxwing. When I reached the correct street, I knew I was in the right place because there was a handful of cars parked all together, about 6 people staring off to the right side of the street and a tripod aimed in the same direction. And there, next to a bird feeder and sometimes on it, was my first CEDAR WAXWING of the year, and the first one I have ever seen in Alaska! Of course, there were more American Robins all around, as well as a small flock of Bohemian Waxwings and chickadees. The Cedar Waxwing was definitely a bonus bird for January in Anchorage. 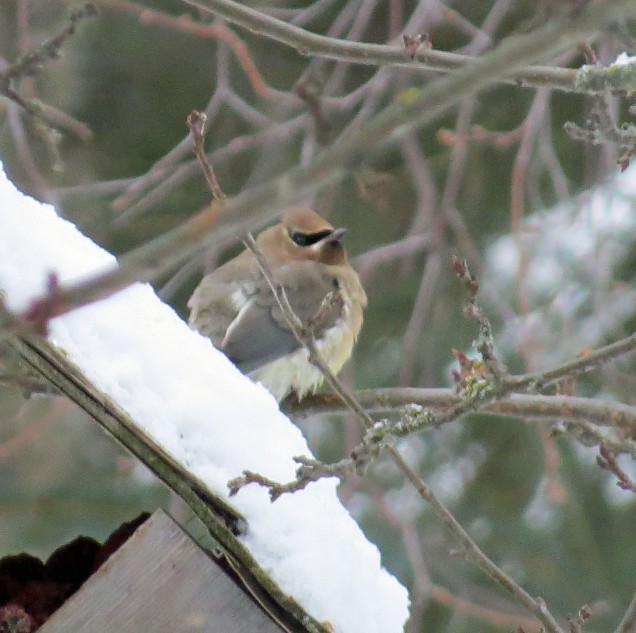