I expect that many birders, especially those in the “lower 48” have already seen American Robins this year and that it was no big deal. Up here in Alaska, it sometimes takes a lot of work to find a robin in January.

It was cold today (about 11-15 degrees at our house in Anchorage) and the cloudiness had turned to blue skies. For a while I was content to look out the window and watch the Pine Grosbeaks sitting on the still snowy branches, but then I realized that if I was ever going to get a robin for my year list, I’d probably need to leave our yard or wait for spring. 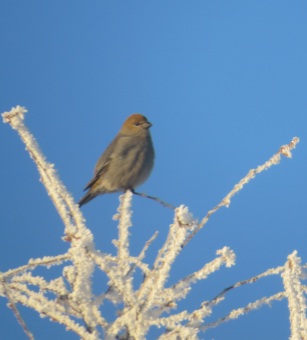 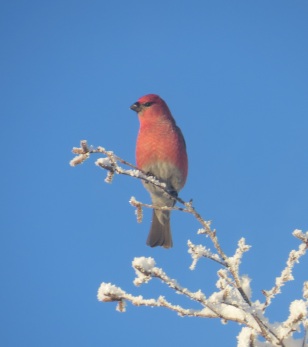 I drove over to the Turnagain neighborhood of Anchorage, where American Robins had recently been reported. I had driven through there a couple of times earlier this week without success but I needed to try again. I nearly ran into my first animal sighting – a moose munching on low vegetation in a yard. 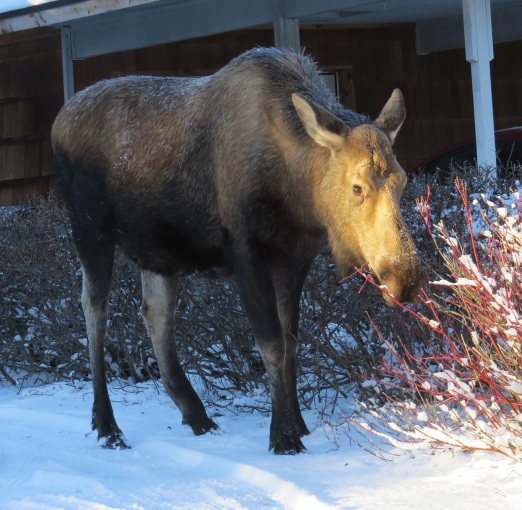 I drove up and down nearly every street in the area where the robins had been reported, finding Black-billed Magpies, Common Ravens, Steller’s Jays, Black-capped and Boreal Chickadees, and flyover Mallards. On a repeat pass down one street I suddenly saw a tree holding about 15 birds just visible over the top of a house. I drove to a nearer street and was in the midst of a flock of Bohemian Waxwings, clearly over 200 of them. They were crowding the branches of nearby berry-bearing and other trees, fluttering down to the ground beneath the trees, constantly calling. I scanned them carefully, but they were all waxwings. 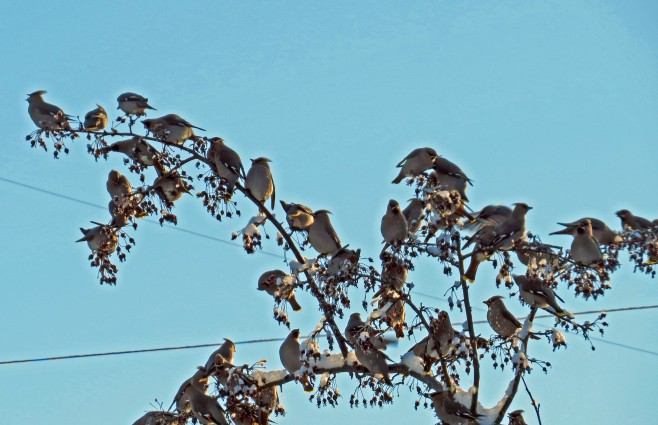 As I was taking pictures of the waxwings, I heard a single chirp of a robin. I got out of my car and looked carefully around. All alone in a distant deciduous tree was a bird that looked longer and larger than the waxwings, and I thought I could detect an orangish hue to its breast. I took many pictures, trying to focus on the bird, which was mostly hidden by branches. Yes, it did seem to be an AMERICAN ROBIN. It flew down, disappeared briefly, and then flew into the small tree where many of the waxwings were gorging themselves, right next to my car.

I’m not sure what bird species I will try for next. Maybe I’ll just drive around outside Anchorage and see what I can see.