Although all the birds up here in Alaska, where it is usually cold at this time of the year, are often hungry in this snow-covered world, I will just mention the three most obvious hungry species in our yard lately, which are Mallards, the previously discussed Northern Goshawk and Common Redpolls.

Lately, every morning even when it is dark, every late afternoon (about 5 pm) and every evening until long after dark, there are Mallards down in our back yard, either eating madly, dozing or rapidly trying to escape our neighborhood Northern Goshawk. I don’t have any Mallard pictures here, but below is a picture of the Goshawk taken three evenings ago, which I watched through the window catch a male Mallard. 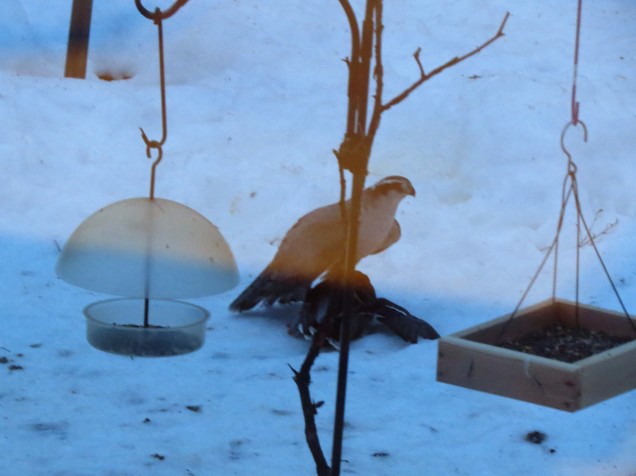 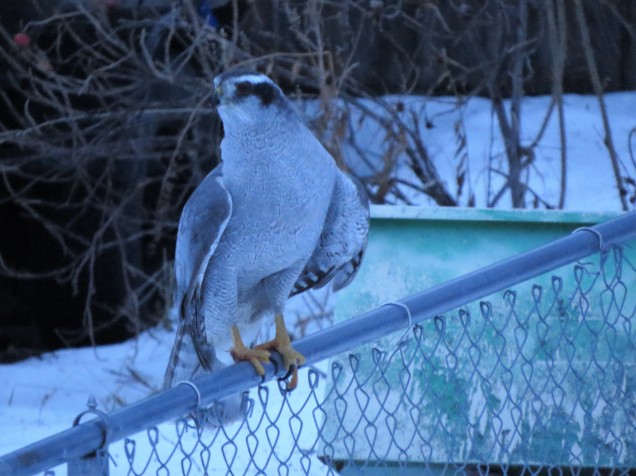 As I stared out the window at the struggling Mallard I realized that I needed to try to rescue it. I raced outside, causing the Goshawk to flee at the last minute and the still alive Mallard to dive under the porch overhang into the farthest corner. The Goshawk returned and sat on the fence looking for its escaped prey, then flew up to our closest birch tree and finally left, because I did not leave. The male Mallard stayed put under the porch. Eventually the other Mallards returned and ate, but the bird under the porch appeared too traumatized and/or too injured to come out. Time passed and I eventually decided to see if the cowering Mallard could/would come out. It was still alive and could walk, and I could not see any injuries so I gently herded it toward its fellows. It joined them but did not eat and just sat at the water dish. The rest of the Mallards flew away for the night but this one did not even attempt to fly, so I gently herded it back under the porch, hoping it would rest and recuperate overnight. Of course, later when it was time for our dog to go out I could not let him run free but had to keep him on a short leash away from the duck. The next morning there was no sign of the duck, and no feather piles indicating he had been killed, so presumably, he flew away.

Last night when I put out corn and the Mallards again arrived, the Goshawk immediately also arrived nearly flying into me in its attempt to get a Mallard, which of course scattered the panicked Mallards away. I had hardly gotten up the steps to go back inside when the hungry Mallards returned, immediately bringing the Goshawk back to our yard barreling again into the frantic midst of the ducks, maybe 15 feet from me. Again everyone left, but I stayed outside until the Mallards came back in a few minutes, and I kept guard over them until all the food was gone and the Mallards had all gone.

Tonight the Mallards came and stayed for a couple of hours, but no Goshawk. For which I was thankful. I know the hungry Goshawk will get more Mallards, but I would just as soon that it did not happen in my yard, at least when I am there to watch it. Life is hard for all concerned – the Mallards, the Goshawk and me.

On a much cheerier note, this is clearly a Redpoll winter in Anchorage (and I understand that is the case in Fairbanks as well). Some winters there are very few around our yard. For the last week or so at many times throughout the day they have been coming in waves of 40-300 or more to our yard, swarming over all the feeder and porch surfaces on which I have spread seed (“Redpoll Blend” sold at the local feed store), as well as hopping on the snow-covered ground and clinging to all the birch branches. Although they take off often and flit about a lot, they keep coming back and are very tame. Without much effort, I have a couple of times walked out on to the porch while they are there, approached them with seed in my hands, and had them hop on my hand at eat. While they do have known predators, a Sharp-shinned Hawk and a Northern Shrike that have both recently visited our porch too, I haven’t yet had the misfortune of witnessing any Redpoll deaths. 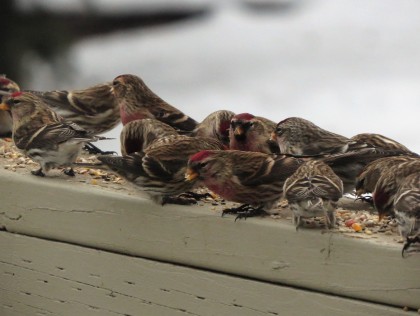 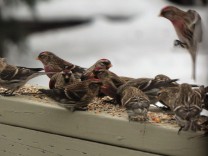 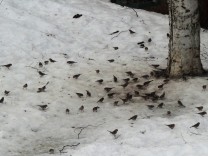 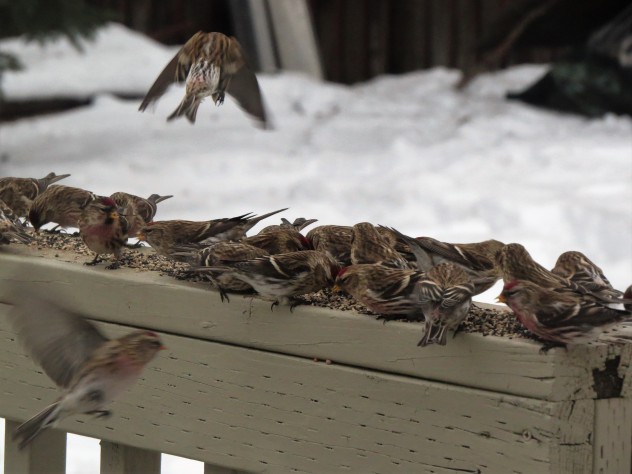