It has taken awhile to wade through the nearly 2500 photos that I took on this trip.I am hoping to do a couple more posts on it after this one, including scenes of the hills and tundra, just beginning to turn to reds and yellows, and photos of birds seen for the first time in Nome.

There was a large difference between the number of birds that I saw in Nome in late August and the number that I saw in early August. Many of the smaller birds were no longer heard or seen, but of course, it is possible and even likely that some of them were hiding in the bushes and had not yet migrated. The raptors were much more noticeable than they had been before, and they are the subject of this post.

On Teller Road, there were at least four Rough-legged Hawks hunting on August 27th, usually hovering and backlit, or hurrying by and out of sight.

The next day early on my drive up Kougarok Road, there was a Peregrine Falcon sitting on a pole, apparently hunting as it looked around and downward. I heard the chips of sparrows in the bushes beneath the falcon, but the falcon just sat. It only moved from the pole when I drove closer and passed where it had been sitting. 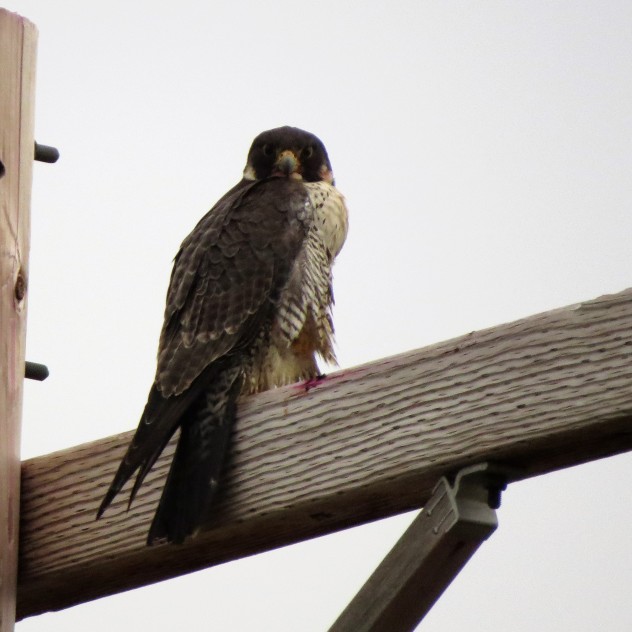 Farther up the road, two Golden Eagles were perched high above the road. Another was seen flying away a couple of days later on Teller Road.

On the next hill on Kougarok Road, a Merlin also sat waiting (in my wishful thinking, erroneously originally identified by me as a Hobby with its reddish leggings), and then it flew away and disappeared, never to be seen again.

In a brief trip along Safety Sound later that day, a Northern Harrier was photographed (others had been seen earlier on the other roads but not photographed).

On August 29th, there was another Peregrine Falcon unsuccessfully harassing ducks out on the water at Cape Nome before it came and perched near me on the cliffs.  A redpoll (small white dot at left of first photo) bravely scolded the Peregrine. 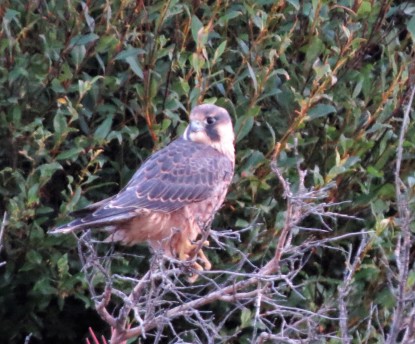 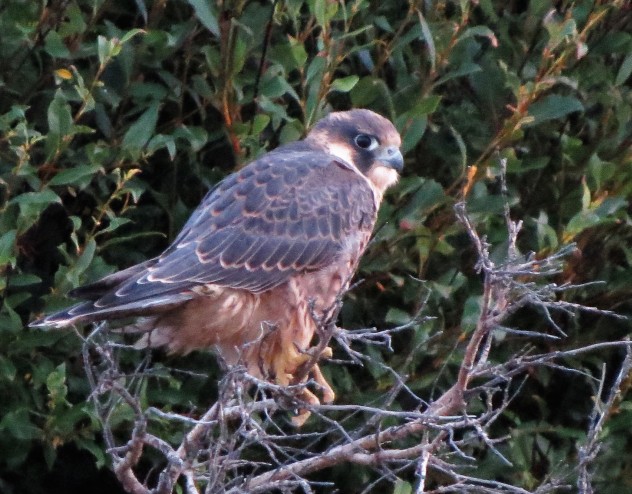 Most exciting was the number of Gyrfalcons seen. On Teller Road on August 30th, three of us first saw a Gyrfalcon perched on the ground. We screeched to a halt. As it took off I tried for photos but failed. Soon thereafter, there were two Gyrfalcons circling and chasing each other near a cliff before both hurtled off and disappeared. Again, bad photos.

I thought that would be the best I could do to document Nome Gyrfalcons, but the Gyrfalcon on Council Road the next day was more cooperative than I have ever experienced for a Gyrfalcon. I looked upward into the sun to see it and try to photograph it, as it sat for a few seconds on a low cliff along the road. It then squatted and launched off the cliff away from me, never to be seen again as it dropped below the cliff. The results were rather interesting views of a Gyrfalcon. 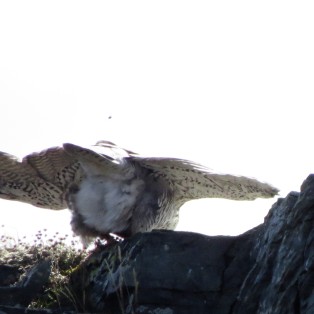