I spent most of yesterday not being able to bird. I was aware that a Sabine’s Gull had been seen the day before out on the Anchorage mud flats, but assumed that it would disappear and/or I would not have time to go look for it and/or if I did look I would not be able to find it. I think that I have only seen one Sabine’s Gull before this in Alaska, and it was in Nome a long way from Anchorage.

Important, moving commitments filled yesterday morning and much of the afternoon. Not long after Dave came home from work, we went out to an early dinner to relax and for me to tell him about the day’s events. When I checked my messages on my phone while we waited for our dinner I saw that the Sabine’s Gull had been seen just after 6 pm. We ate leisurely – I still figured there was no point in going to look for the gull. Then as we drove home after eating, I decided to give it a try. As soon as we got home I rapidly got my birding gear together and raced out to the coastal trail by Westchester Lagoon, at what seemed to be the northern end of the beach area where the bird had been reported. I walked much faster than my usual pace along the coastal trail heading south, stopping to scan the mudflats with binoculars and scope wherever there was an opening. It was nearing low tide and the mud flats stretched out to the west a long way from the trail. There were hardly any birds and no other birders. The few gulls that I could see were flying and even I could tell that they were clearly not Sabine’s Gulls.

I passed the Audubon’s Bench and the Fish Creek bridge. Nothing. Along the way to Lynn Ary Park where the bird had also been seen the trail is crowded with alder brush on the inlet side for long stretches blocking any view so I just raced along without an opportunity to see if there were any gulls out there. At an opening not very far north of the park (maybe 5 minutes more walking to get there) there were gulls, many of them, some very close to me. Most were Bonaparte’s Gulls but there was one with the beautiful black, white and gray pattern of a Sabine’s Gull. It was flying low to the mud and puddles, periodically dipping down, and every now and then landing and immediately lifting off again. All the while it was rapidly moving south. I left my scope and raced along the path toward it, hoping to get near enough for a picture. At 7:16 I took two rapid sets of pictures and then there were bushy trees between me and the bird and it disappeared from view.

As you will note, my pictures of the gull appear as if my camera were set to take black-and-white pictures but that was not the case, which can be seen in the next picture that I took of a sleeping Sandhill Crane that I saw as I walked back along the trail. The distant flats beyond the crane are mostly black-and-white but the grass and crane are in color. I kept hoping the gull would be seen again wandering the beach but it was not. There were other birds coming in to rest on the mud, including Bonaparte’s Gulls, a few Arctic Terns, Greater Yellowlegs, and Hudsonian Godwits. 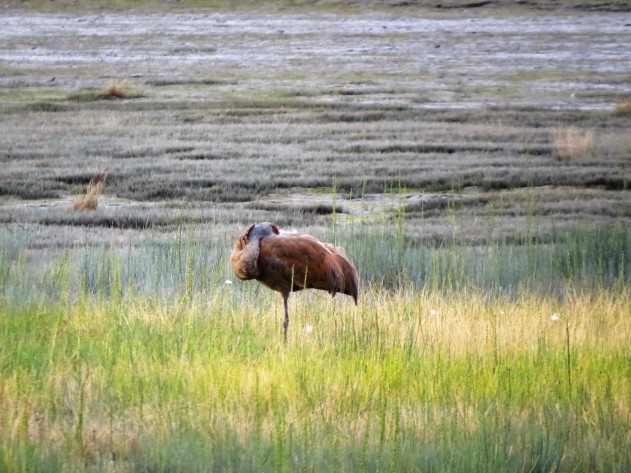 A very rewarding ending to a very filled day.