Until I got rather blindsided by a very nasty cold/flu I’ve been quite busy in the last month doing PowerPoint presentations for my 8 classes (3 classes done so far, all 8 PowerPoints mostly done), doing a PowerPoint on my big year (done but likely to be tweaked), and beginning to write on my third book (more about that another day). Today I stayed inside and slept and tried with mixed success to get my fever down, but yesterday I ventured forth to Cuddy Pond to see the Common Goldeneye that was reported. There were at least two, easily found. 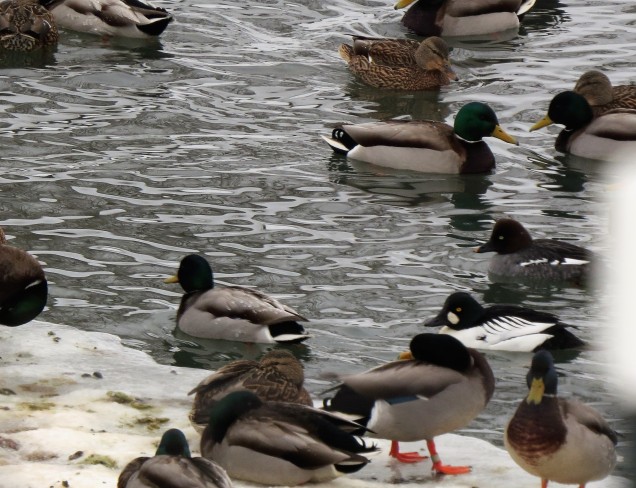 The highlight, just north of the pond at one of the Loussac Library’s parking areas, was a strolling moose, on its way to eat shoots on the brush around the pond. I started videotaping it as it walked over a snow pile, on to the parking lot where I was parked, directly toward my car, and then passed immediately in front of my car. It stopped at the other side of the parking lot as cars went by close to it. The moose stood in one place so long I gave up videotaping and then it walked over the snow pile and went down to Cuddy Pond.

I took a quick drive out to the airport and got a photo of the only bird I saw out there, a Common Raven, and some snow-covered branches.