Although we saw a mixed flock of McKay’s and Snow Buntings when I was in Nome three days ago, I did not get a good picture of any of the McKay’s Buntings. On December 1, Louann Feldmann and I flew to Nome with the goal of getting good views and hopefully good pictures of McKay’s Buntings and we did! For part of the day we were joined by James Levison from Fairbanks. Before and after he departed for Gambell we saw McKay’s Buntings at a feeder site off of the Nome-Teller Road, as well as Snow Buntings up until it was too dark to see much detail. So, we drove for awhile along the coast and saw the sunset before dinnertime. 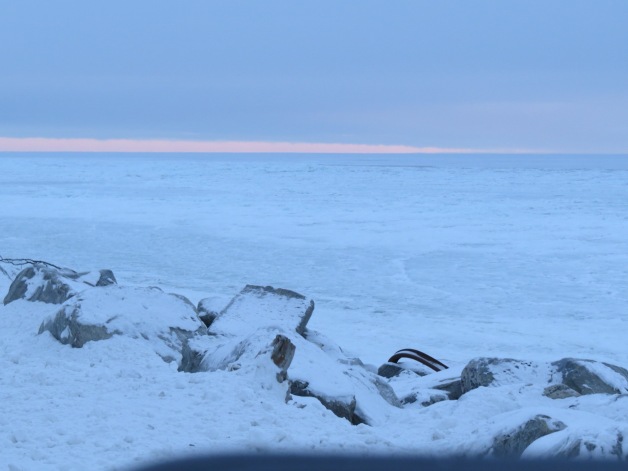 The next day Louann and I went back t0 the seed-feeder area before dawn and waited to see if the buntings would come back. Shortly afterward (still at predawn, at 10:30 am), a few McKay’s Buntings came in, mostly staying on the electric lines, and then a flock of about 30 buntings, mostly Snow Bunting came down, and these flew up to the lines and were replaced by another flock of 10 buntings (all but 2 were McKay’s). When we left to go see the sunrise at about 11 am, all 40 buntings were up on the lines above the seeds.

Although I got decent pictures of both species of buntings, the lighting was quite low and the pictures unfortunately are quite dark.