Along with Anchorage birders Joanna Hubbard and Cathy Foerster, I looked for Ross’s Gulls in Barrow beginning about 9:30 this morning (just about dawn).

We did not see Ross’s Gulls until just after 2 pm. Even then there were only a few small groups of Ross’s Gulls, mostly quite a ways off shore so the pictures were again still fuzzy.

The Glaucous Gulls are still centered around hunks of whale carcass that remain available to them. Also present with the Glaucous Gulls, as identified by John Puschock, were a handful of Thayer’s Gulls and a Slaty-backed Gull, both of which I have seen earlier this year. 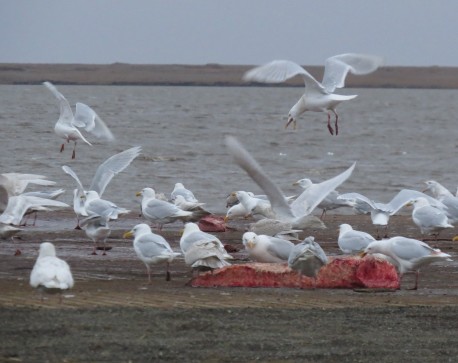 There also were multiple organized flocks of Long-tailed Ducks, each flock zooming by in a different direction.

About noon I took a break from gulls and looked at the Hoary Redpolls at a local feeder.

Later, we took another break and drove south on Cake Eater Road, where a man driving by pointed out two distant polar bears, which happened to be what we were looking for. One of the bears seemed to be looking across the field at us, while the other appeared to be sleeping with its feet up in the air.

I have another morning here in Barrow on this trip and then I expect to return in November to look for Ivory Gulls.