I returned home from Anchorage Audubon’s great ferry trip to Dutch Harbor on the night of July 3rd. Because there was no Internet availability on the boat, I am finally able to blog about the trip.

Almost all day long for the long days of the whole trip the birders and our leader Aaron Bowman stared out across the waters looking for, and often seeing, pelagic birds. The morning of the first day was a bit rough and rainy and I was concerned that while this might increase the number of bird species, we might all be too sick to see them. The rest of the days were wonderful and not rainy  however, although we did have periodic high winds.

Our trip left out of Homer about at dawn (4:45 am) on June 29. For a little while, we just saw the usual Homer birds, such as Glaucous-winged Gulls and Black-legged Kittiwakes.

Then we started seeing many, many SOOTY SHEARWATERS. Soon, there were Tufted and Horned Puffins, at least one Rhinoceros Auklet, Red-necked Phalaropes, Common and Thick-billed Murres, light and dark Northern Fulmars, a few FORK-TAILED STORM-PETRELS, and a few BLACK-FOOTED ALBATROSSES. 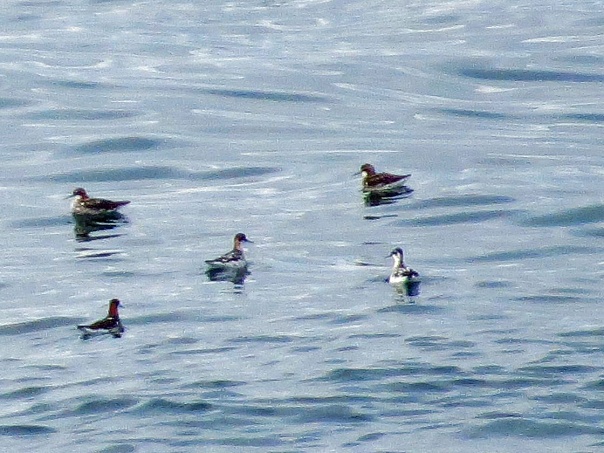 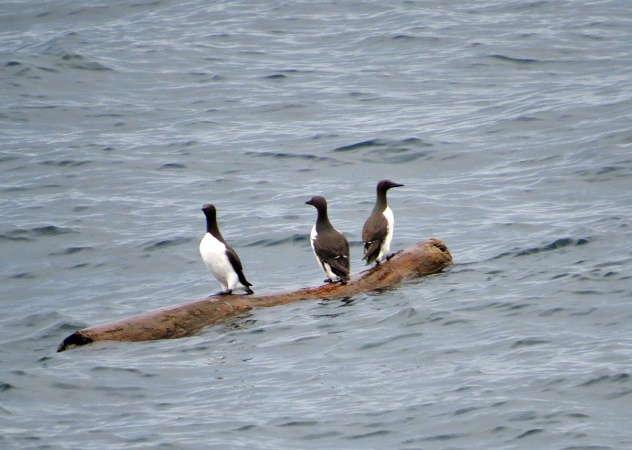 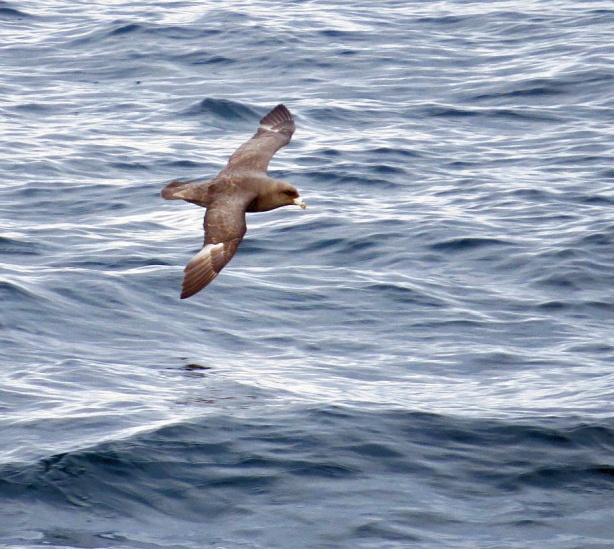 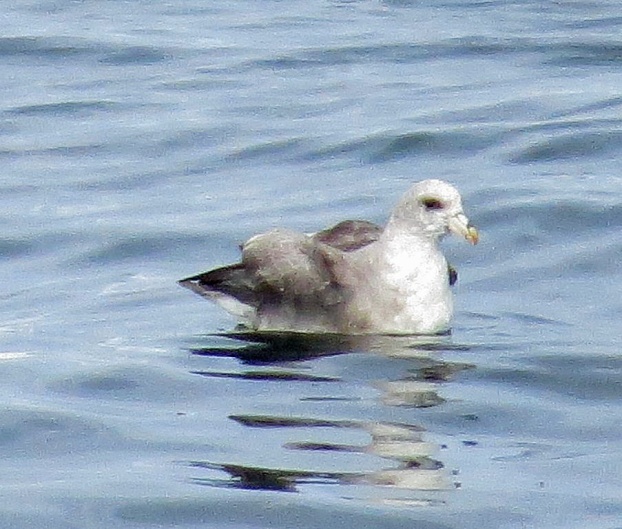 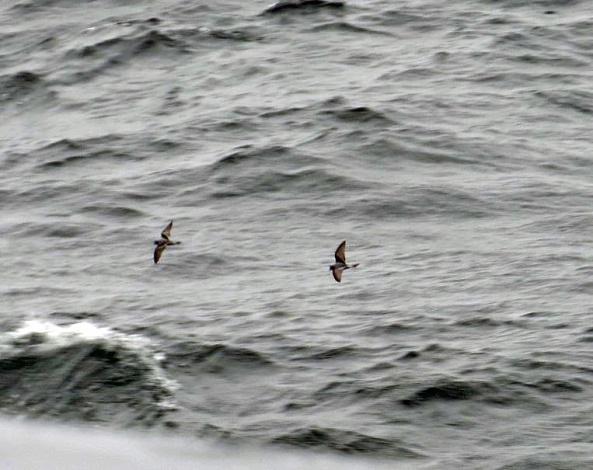 About 2:30 we reached Kodiak where we had a few hours on shore to bird and then we were off for Chignik which we reached about noon on June 30th. There were the same birds as before plus a Parakeet Auklet, Pomarine and Parasitic Jaegers, at least three CASSIN’S AUKLETS and three Black Oystercatchers (shown). Late on the 30th we reached Sand Point and saw a few Arctic Terns and Bald Eagles. At numerous places along the route we saw Pigeon Guillemots, particularly near the harbors as shown. 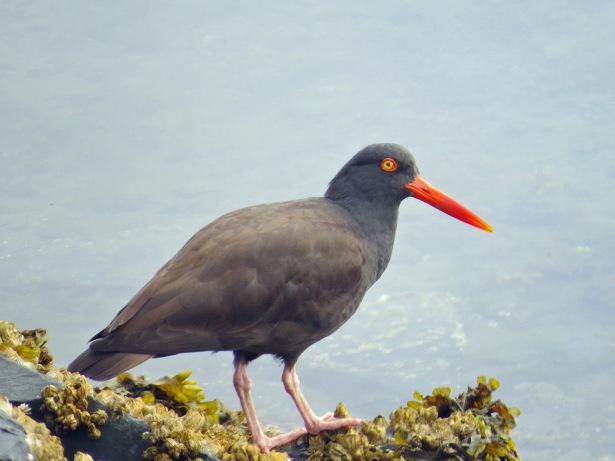 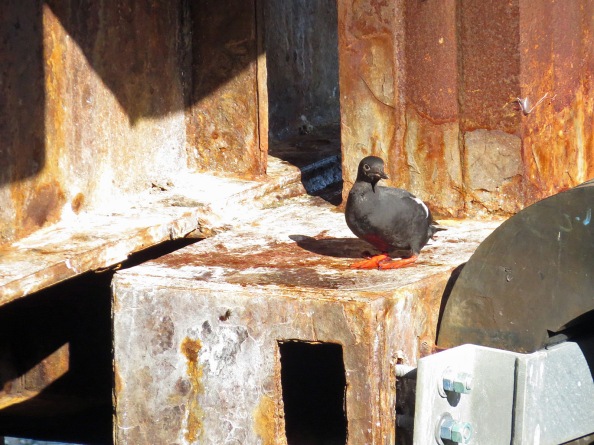 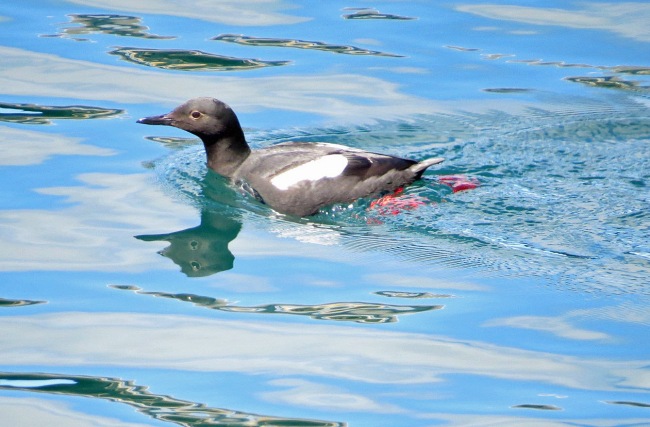 Early on the morning of July 1st we reached King Cove on a beautiful clear day. Walking around there I saw a Belted Kingfisher, Golden-crowned Sparrows and more Bald Eagles, and heard a Hermit Thrush and Yellow Warblers. Later in the morning we were in Cold Bay, where due to being one of the people to win a lottery on the ferry I went on a bus to Izembek NWR. Highlights there were a fox, a couple of Northern Wheatears, Lapland Longspurs, a Semipalmated Plover parent and chicks along the road and Bank Swallows. In the early evening we reached False Pass where there were Harlequin Ducks, Wilson’s and Yellow Warblers, and Savannah (shown below), Fox and Golden-crowned Sparrows, plus fields full of purple lupines. Before it got dark (midnight or so) we saw Ancient Murrelets and more Northern Fulmars.

On Saturday, July 2nd we stopped briefly in Akutan before reaching our Dutch Harbor destination about 10:00 am. On the way we saw large numbers of puffins, Northern Fulmars, three Kittlitz’s Murrelets and our first WHISKERED AUKLETS (pictures will appear in Part 2). I also will talk in Part 2 about the wonderful charter boat that six of us went on later on July 2nd (another six went on July 3rd) and the land birding with Suzi Golodoff.

PLEASE NOTE: a current report of all birds seen to date this year can be found on lynnbarber.com