Once again, the goal was White-tailed Ptarmigan. Having heard quite a few reports that one could hike a trail that begins at Basher Trailhead in the Chugach Mountains in east Anchorage and goes to Near Point (not so near as I learned this morning) and sometimes see ptarmigans, I decided to give the trail a try. As it turns out I should have done it when there was snow and ice on the roads and ground, because it appears that all of the ptarmigans have moved higher into the mountains now. But I had been nervous about driving the mountain road to get there. Hopefully, I’ll figure out another place to get them this year. It is good that I went on the hike anyway, because now I have a much better idea of what the trail and the terrain are like.

I began my hike about 8 am. I could see right away that I did not need to keep the trekkers on my boots as the trail was mostly sloppy with mud until I got way up on the trail. Early on there were spectacular views down into the Anchorage area. The trail goes up and down and then along the top of a cliff and then eventually down to a couple of creek-crossings and the does a long steep ascent to where the still somewhat snow-covered peaks are visible. Right away, I had a singing Northern Shrike along the trail.

At the beginning of the hike the sun was just coming up ahead of me, making it difficult to look up along the trail, so I was mostly listening for birds and watching the muddy trail to find the best place to walk. As I walked I noticed quite a few cloven moose hoof-prints in the mud and thought about the commonness of these animals in Anchorage. 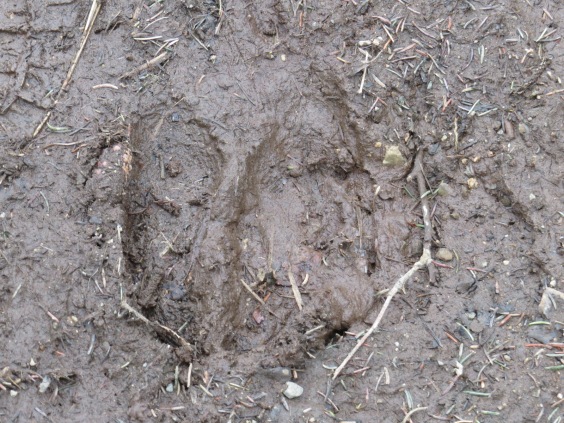 All of a sudden I realized that the bright sun ahead of me was silhouetting a moose, and that I had almost walked right into the moose. It was an adult female and she and I were about 10 feet apart before I realized it. I very hastily backed down the trail and she stood her ground, snorting and blowing puffy white breaths into the cold air. There was nowhere I could go to escape her so I just stood there watching and talking to her, and finally taking a few pictures. I figured later that if she had trampled me, someone could have looked at the pictures in my camera to figure out who had done it. Finally, she turned and began walking slowly away from me up the trail, where I was going. I just waited and eventually she wandered off the trail and I sneaked by and kept going past her. 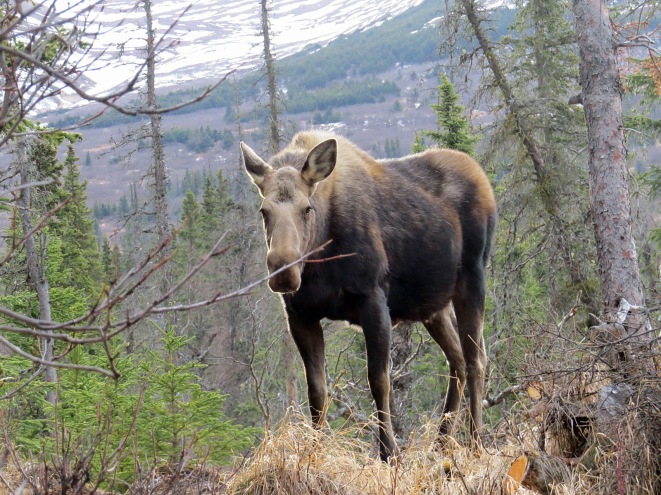 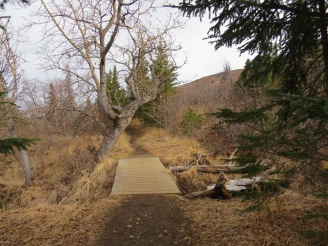 Other than Boreal and Black-capped Chickadees, a Black-billed Magpie and flyover Mallards and Common Ravens, there were no other birds on the way up. Just short of Near Point itself, and a bit less than 3 miles from my starting point, having talked to another hiker who assured me that she had not seen any ptarmigan beyond where I was, I decided to turn around and head down. Going down, though a bit tricky on some of the slippery muddy slopes, was much easier and quicker. The chickadees were still around.

The only new day-bird on the trip down shot out of one of the spruce trees and crash-landed nearby. It was a female Spruce Grouse, who clucked nervously at me as she gradually eased away into the underbrush. Pretty similar to a ptarmigan and very pretty, but….