I’m talking about winter. Somehow with all our above-freezing snowless days lately I almost forgot that it was still winter. Today I was reminded, however, about 25 miles north of Anchorage, when I was suddenly in the midst of swirling snow. The snowfall became so heavy that I could not see anything. Certainly it was going to be difficult to see birds. So I turned around and birded a few places in the north Anchorage area.

At the Ship Creek Boat Launch area the stunning sunlit mountains views beneath heavy gray clouds toward the west made up for the lack of birds.

Black-billed Magpies complaining about the snow and Common Ravens stoically sitting it out were the default bird everywhere I went, if there were any birds at all. In Government Hill, there was a flock of Common Redpolls and a couple of Black-capped Chickadees to add a little interest. 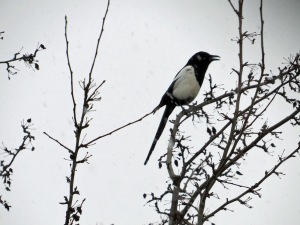 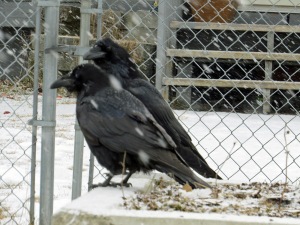 By about 10:30, I decided that it made more sense to go home and see what was on the feeders, and to start shoveling. Just before noon, a flock of about 50 Common Redpolls invaded our yard and all feeders and feeding areas, including the porch railing and mealworm feeder. On our porch they were so close to the door that our dog became a very interested bird-watcher. 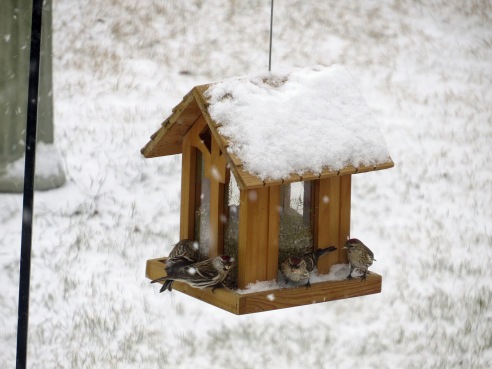 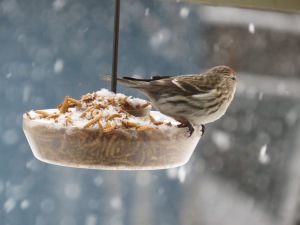 A Downy Woodpecker spent an hour or so just hanging on one feeder and then another, only eating sporadically as the snow kept falling. 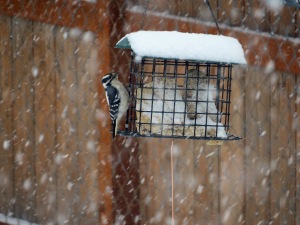 And it kept snowing until we had about 3 inches. I heard later in the afternoon that in just a 1.5-hour period in the middle of the day, there were 25 accidents on the slippery roads in Anchorage. Lovely stuff though.

Still at 118 species for the year