It wasn’t actual sunrise when I arrived at Potter Marsh in south Anchorage this cold winter morning, but the sun was finally coming over the mountains to the southeast, so it seemed that way. All was silent at first, except for my boots scraping on the new frosty ice layer on the boardwalk. 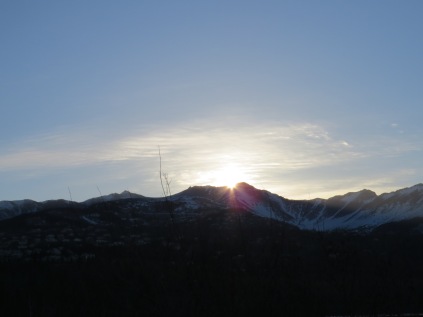 Gradually, the frequent four species at the marsh appeared –  Black-capped Chickadee (out in the low brush), Bald Eagle (on the nest), Common Raven (fly-by) and two Black-billed Magpies (squawking at me and then flying away fast). As I was about to leave the boardwalk, a Downy Woodpecker flew by. So, five typical winter species. 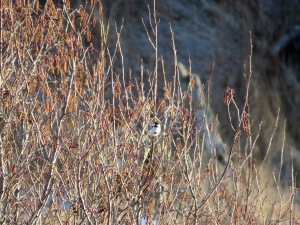 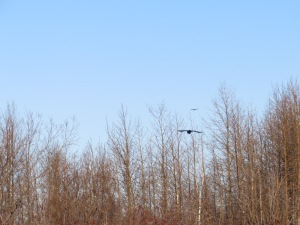 I figured that was all that I was going to see, and got in my car to leave. As always, I kept my window down as I drove out, just in case there was something to hear. Immediately after I left the parking lot, I heard a beautiful, jumbled sound like nothing I had heard all winter long. There high in a deciduous tree to my left was a singing male Rusty Blackbird! Because I had seen a Rusty Blackbird in Hoonah in early February, this was not a year bird, but it was still a very welcome bird. For a moment, it seemed like spring was on its way. A bit premature, I’m sure, but the singing sound of a Brown Creeper shortly after that added to the illusion.

I still had a bit more time before a morning appointment so I made a quick trip to Spenard Crossing. There was nothing new to report there. Mallards did seem to be pairing up, or maybe it was just my spring-seeking imagination. The trail was dangerously icy so I did not stay long.

Tomorrow I may head north again to try to find one of those Ospreys that keep being reported.

Still at 118 species for the year