My plan today was to bird a couple of different places this morning so I could submit lists for a couple of sites for the Great Backyard Bird Count that begins today. I chose to go first to one of my favorite Anchorage sites, the Campbell Creek Estuary Natural Area. I figured I’d at least get Black-capped Chickadees, Steller’s Jays, Black-billed Magpies and Common Ravens there, and I did. It was a very high tide with water nearly reaching one of the observation areas. 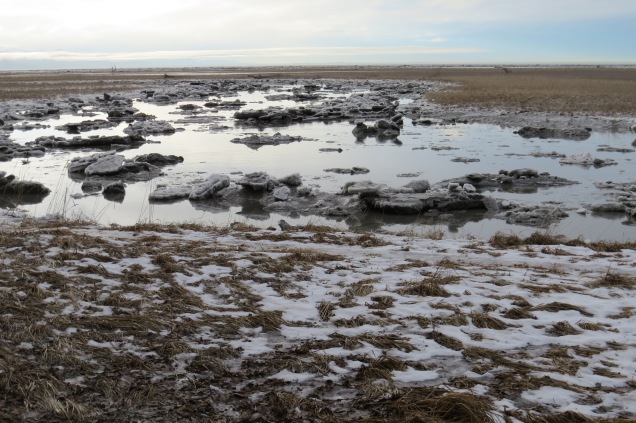 I did my usual counterclockwise loop around the trail at the Natural Area and then headed out on the Forest Trail to its end and then turned back. The Steller’s Jays followed me after I let them have a few peanuts.

All of a sudden the magpies started calling raucously in the distance and the jays all headed off to the west through the woods toward all the racket. The frantic-sounding noise kept getting louder and louder so I decided to investigate. I could see the jays and magpies darting into and out of a dense area quite close to the ground. Maybe what they were after would be visible and not hidden way up in a tree. The terrain between me and the action was covered with fallen logs and as I got nearer to the sound, I realized that I would have to clamber up a short but steep hill to get to where all the frenzy was.

When I reached to the top of the slope and looked around I was astounded to see an owl at eye level about 15 feet from me! I assumed at first that it was a Northern Saw-whet Owl, a bird that I understood was much more likely to be found and seen than a Boreal Owl in this area. I began taking pictures, but when I looked closely at my pictures I realized that I had found a Boreal Owl. The owl turned its head periodically as the jays and magpies approached, then stopped to preen when they left for a while. Only rarely did it look in my direction, and then it only opened one eye. Eventually the magpies returned to make more noise and then they, and I, withdrew, leaving the owl where we had found it. 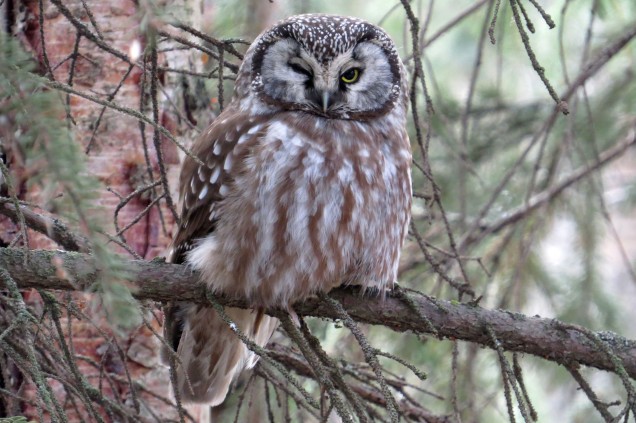 I never did get to bird anywhere else this morning – too much time reveling in the owl find. What a wonderful use of my time!

Still at 107 species, but happy anyway