After my bird-class this morning (which I very much enjoyed doing!), I birded in the Airport Heights area of Anchorage for about a half hour. Due to the heavy fog that we have had the past couple of days, the trees were coated even more fully than I had seen them earlier this winter, and everything was beautiful. 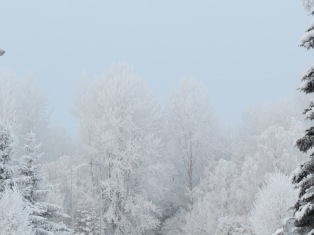 The American Robins and European Starlings were busy either eating frost covered fruit or resting in the fruit trees. 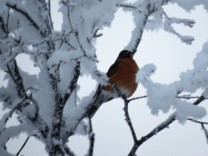 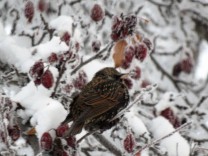 Common Ravens were everywhere, mostly perched on high trees and poles. I counted about 13 of them in about 10 minutes, scattered around the neighborhood. Two of them flew down to the stop of plowed snowbank just ahead of me. I stopped and watched as they proceeded to chortle to each other, nuzzling each other’s bills, and just carrying on with a little conversation. I have never seen them acting this way. I did a short video of them that I plan to show my class next week. Only a passing car finally caused them to fly up to a nearby tree. 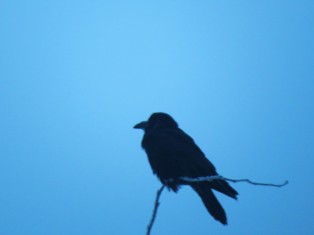 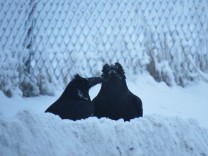 At home, there wasn’t too much activity, at least while I was around. I took pictures of a Hairy Woodpecker pounding at the frozen peanut butter in the log on the porch and Common Redpolls flitting among the frosty trees. 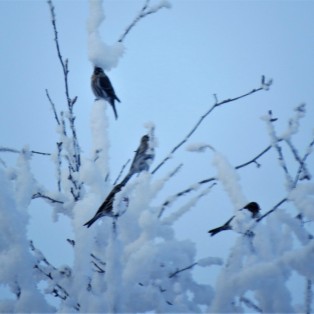 It is forecast to be very cold this weekend, not getting above zero degrees, so I made another batch of my homemade peanut butter “suet” mix so I don’t run out.