Actually, it’s “dunlin”. DUNLIN was my new bird for the day. But until I finally saw a new year bird late this morning, the thought had crossed my mind that maybe I was done for the year, that I wasn’t ever going to get a new bird. My originally stated goal for this year, which I originally thought was feasible enough, is 250 species, but for the last month it has seemed that I was not ever going to get to half my goal. Today I did. So, no, I am not done yet. After all, it’s April now and things will surely escalate soon.

Before getting a new bird today, however, I did a lot of other birding. I began the day where I ended yesterday’s birding, in Kenai on South Spruce Street at the spot where a Great Gray Owl’s hooting had been reported. I did not see or hear an owl either time, so this morning after it just started getting light, I went to Buoy Road where Great Gray Owls have been seen multiple times, and where I have looked multiple times without seeing one. It was a beautiful moonlit morning but again no owl.

I then went to Cannery Road, the site where I had seen a Short-eared Owl on my last visit to Kenai. The sun was beautiful peeking through the clouds. There were numerous gulls (deemed by others to mostly be hybrid Herring-Glaucous-winged), a couple of Bald Eagles, Mallards and Northern Pintails, Common Ravens and a singing Northern Shrike. There were nearly 100 Common Goldeneyes on the river.

Realizing that it was soon going to be high tide in Homer, I decided to drive down there to see if the rising water had pushed in any shorebirds or if anything else was to be found. Although it was long past sunrise, it was very cloudy and rainy in Homer, with a brief break in the clouds over Homer Spit when I arrived.

For a while it looked like nothing much had changed. Bald Eagles as usual were sitting on most available spots.

I was sitting in my car off to the side of Freight Dock Road in the pouring rain when a flock of shorebirds burst over the road in front of me, followed shortly by another flock. I immediately thought “dunlins?” but they all were gone. I wandered around some more and then went back to Mud Bay, and there was a very distant flock of shorebirds bunched closely together, scurrying around at the edge of the mud. The rain had mostly let up and I scanned the group for a long time. My conclusion: most of the 100 or so shorebirds appeared to be Rock Sandpipers, but there were definitely some (maybe 5-8) slightly longer-billed shorebirds among them, Dunlins. Although I tried for photos, all my photos show are blurry grayish blobs. The whole group disappeared during another rain shower and I could not refind them.

Before I left Homer,  went to the Beluga Overlook to see if I could find any snipe, and instead found two moose, which were very close to me as I came down on to the observation deck, scarily so. The first one I saw started walking toward me and then I noticed the second moose, apparently the mother. Both of them started grazing in the water and I backed away hoping not to get them interested in me. I never had a chance to check for snipe. 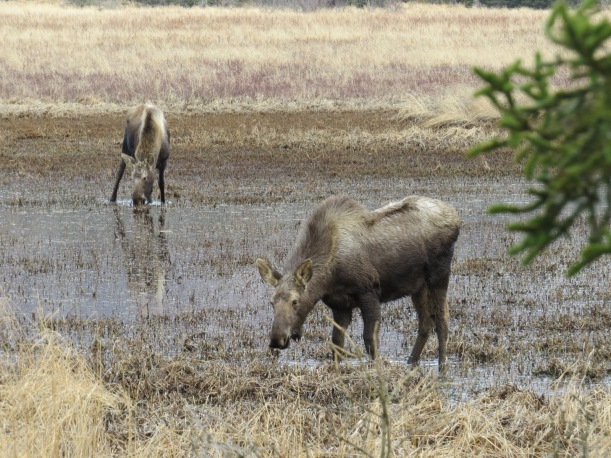 I began my drive back to Anchorage (about 230 miles) about 1:00 pm. I tried not to stop too often since it was raining, but could not resist stopping for some of the many Bald Eagles and for some of the Trumpeter Swans that I saw, about 17 in all spread out over 6 places along my drive. 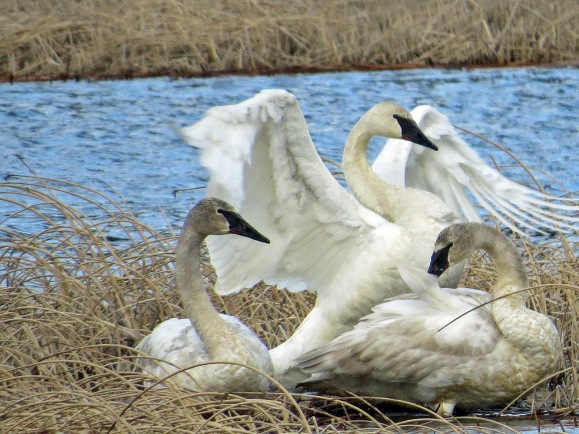