Thanks to Justin Saunders’ text to me yesterday afternoon telling me he was seeing a Northern Harrier, I was motivated to go north again this morning to Palmer’s “East Matanuska Road” where I saw the Red-winged Blackbird two days ago. 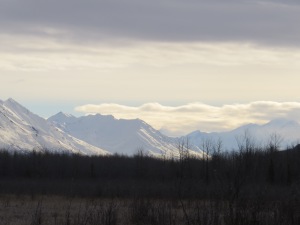 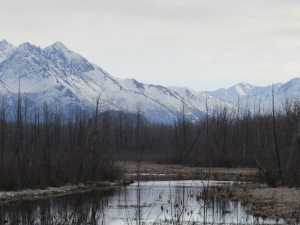 Almost immediately after I got on this road, a large brown narrow-winged raptor with a large white rump area flew off below me across the railroad tracks and disappeared beyond the trees – a NORTHERN HARRIER female.

For the next hour and a half I drove and walked the road and tried to refind the harrier. What I did find instead was four Bald Eagles (two adults, one nearly all brown immature and one a more splotchy brown and white immature), a few Black-billed Magpies, a couple of Common Ravens, a small flock of Common Redpolls, ten Common Mergansers, two mallards, two Black-capped Chickadees and a Hairy Woodpecker. 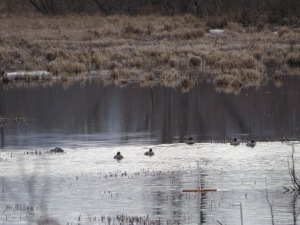 I drove into Palmer and got gas and returned to try again for a better view, and maybe a photo, of the harrier. After much scanning of trees, I finally located the Northern Harrier perched across the wetland. With my spotting scope I was able to confirm that it was the harrier but all my pictures show is a brown bird-blob. I expect I will get better pictures of them relatively soon, perhaps at the hawk watch north of Anchorage in the next month or so.  I am just glad that I finally got a new bird in March.