The plan was for Louann Feldmann and I to drive up Arctic Valley Road to look for ptarmigans this morning, but it did not happen. We did drive to the beginning of the road, but there we encountered a roadblock. We do not know if the road was impassable or if military maneuvers were planned or what, but we will have to try again another day.

We decided to bird on nearby JBER (Joint Base Elmendorf-Richardson) instead, where she has a permit to go and where I had never birded. As with most of Anchorage, there were very few birds around. Snow covered most of the ground and the lakes were frozen.  Common Ravens and Black-billed Magpies were most common, but we also had a Northern Shrike and a Gray Jay, Black-capped and Boreal Chickadees and a couple of Bald Eagles. We also saw four moose. 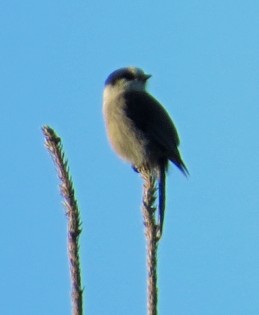 We were heading back toward the gate when we came over a little rise and were surprised to see open water, apparently due to water from beneath the ice of a frozen lake pouring under the road and through a culvert into the unfrozen lake. In any case, there were two Common Goldeneyes enjoying the open water, diving often, and we enjoyed them.