I began the day in the cold dark listening for owls and hoping for Northern Saw-whet Owls for about an hour on the Campbell Creek Trail. Except for the crunch of icy snow beneath my boots, it was completely silent.

After fortifying myself with hot chocolate and a biscuit, I drove out to the Old Seward Highway behind Potter Marsh and did some more owl-listening. When it finally began to get light, I walked the boardwalk, and saw a single Black-capped Chickadee and a distant Bald Eagle.

I drove over to Spenard Crossing looking for dippers or anything new that might have wandered in, and listening for noisy squawking birds that might indicate a roosting owl, but the few birds that I saw were mostly just going about their business in quiet. 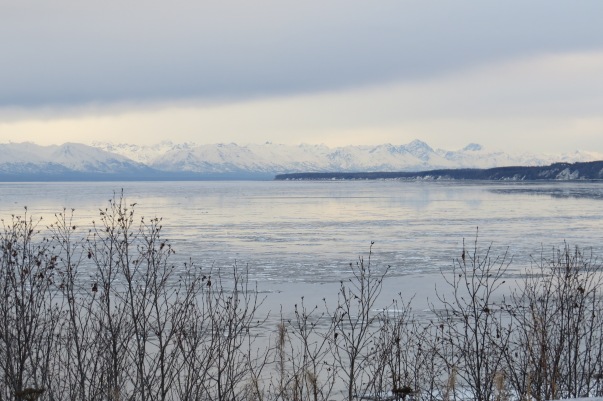 I headed out past Point Woronzoff and the airport thinking maybe there would be an owl around, but even the Northern Hawk Owl did not show. A singing/talking Northern Shrike at least gave me something to listen to and watch.

When I got back in my car, I had a phone message that Peter Scully had found a roosting Northern Saw-whet Owl very near where I was. I called him and we met along the coastal trail and walked together with his dog about a mile back to where he’d found the owl.

The NORTHERN SAW-WHET OWL was perched 15-20 feet up in a spruce. From some angles of course it was completely invisible but if you got into close to the right position you could see its tummy and if you moved just a bit you could sometimes see an eye or two eyes as the owl peered downward. Peter had found the bird by checking out spruce trees where he’d seen whitewash on the trees.

Last winter I heard a Northern Saw-whet Owl from our house every night that I listened from February 24th to April 6th but I never saw it. I fully expect I may hear one around our house this winter, but since birding has no guarantees, I was very relieved to add this owl to my year list and I was particularly delighted to actually see it!