American Dippers, that is, as you’ll see if you read further.

Today I birded from 9:30 am – 3:00 pm at a few Anchorage sites. I began out past the Anchorage airport, with a pleasant but unbirdy walk with Louann Feldmann at the woods edge behind the airport.

We then went to Spenard Crossing to see if the Boreal Owl was going to give us a better view, or even any view, but there was no sign of the owl and the magpies and jays were silent and no help in locating the owl. The first American Dipper for the day did appear by the bridge at Spenard Crossing, actively diving and reappearing on the ice that was lining the river. 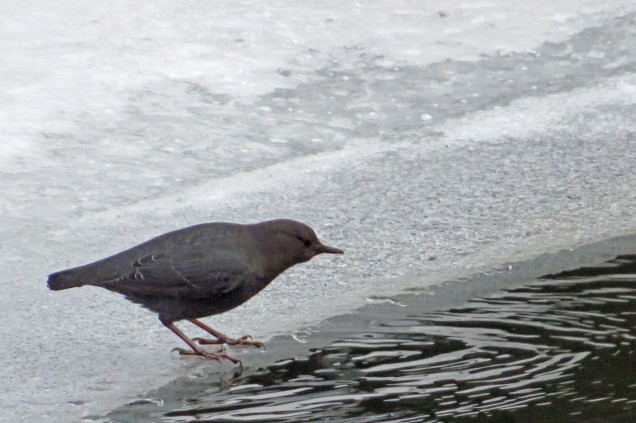 I then drove downtown to check whether any pigeons were around so I might find the downtown Peregrine Falcon, but only a single pigeon plus a few ravens were around.

After that I drove a couple of neighborhoods just looking around for feeder birds or other interesting birds. Although the robins were not around there were a couple of large Bohemian Waxwing flocks.

The final site that I visited was part of the Tour of Anchorage trail ( I walked just under 2 miles each way), where I had previously seen Gray Jays and Black-billed Magpies. Both these species were present on the initial part of the trail. I had a few peanuts in my pockets which I tossed on to the path and one of the magpies immediately flew down and grabbed them. 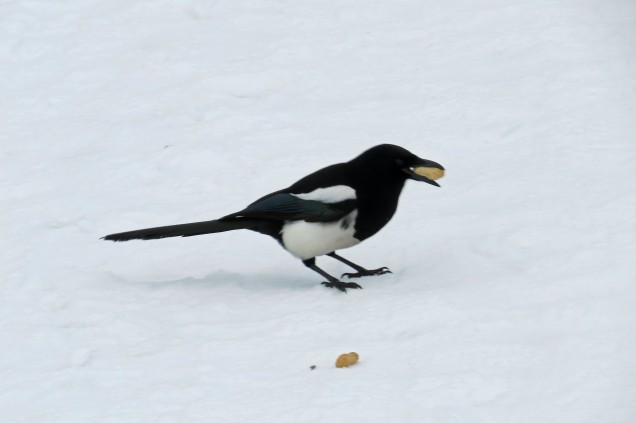 I continued walking the trail under the cloudy sky. Just before I turned around, I had a little flock of about eight Pine Grosbeaks singing and flitting from treetop to treetop. After I turned around and had walked a while, the sun peaked out beneath the clouds and turned the gray-green trees to slightly golden. 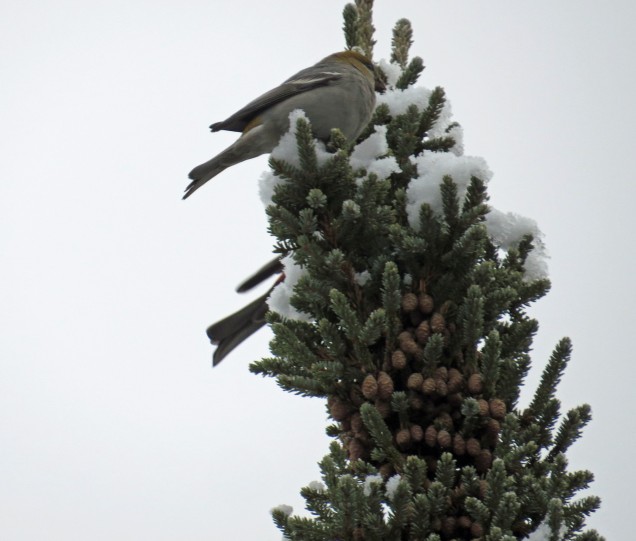 Just before that on one of the stream crossings I had my second American Dipper of the day. This one was nearly motionless on the icy edge of the stream, maybe resting from its diving exertions.

Tomorrow I’m planning on taking a drive north of Anchorage, and maybe I’ll find a new bird for the year.

Still at 101 species for the year