I’m pretty sure that I was within about 10 feet of a  Boreal Owl today. In an area where a Boreal Owl has been recently seen by someone else, Aaron Bowman and I had a flock of about 15 Black-billed Magpies, a couple of Steller’s Jays, and some chickadees and Red-breasted Nuthatches all making an agitated racket and flying at and around a very dense area of a very dense spruce tree this morning. No matter where we went around and under the tree, we were completely unable to see any sign of any critter at all in the spruce, except for the squawking birds. They eventually drifted off, so after a few hours we also gave up. I went back a couple of times later in the day but all was silent and the magpies were not around to signal whether the owl had changed locations or was still in the same spruce. It was nice to have a bit of excitement, and of course we have hopes that the owl will be visible another day soon.

Meanwhile, unlike the Mallards down the creek at Spenard Crossing, I am not sitting around waiting for my goal birds. I continue to look for birds where previously reported and in locations that seem to have potential. Today I checked out the possible Evening Grosbeak area again and wandered downtown and in a few areas near downtown to look for pigeons and Peregrine Falcons. There were some pigeons in the non-downtown areas, but they looked relaxed and un-harassed. 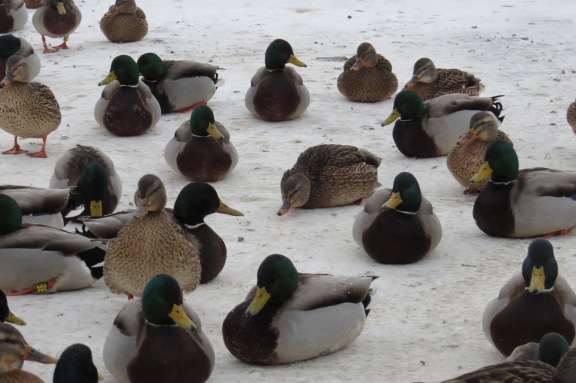 Meanwhile, there are the usual winter birds around to hold my interest and the days continue to be beautiful. Bohemian Waxwings continue to be all over the place around Anchorage. There were two American Dippers zipping back and forth on the stream near the owl-spruce, and everything was tinted gold in the morning sun.

I expect that I will be back at the owl-spot tomorrow morning, perhaps joined by other local birders. A Boreal Owl is a treat that many people wish to see (and was a bird that I missed entirely in my 2008 ABA big year).