Because my big year planning had called for getting a Northern Hawk Owl on January 1 and because I went to Kodiak instead on January 1st and because I just could not find a Northern Hawk Owl yesterday when I was finally back to Anchorage, today I had to try again for the Hawk Owl first thing. I contacted Louann Feldmann and she agreed to go with me for this bird and whatever else we could get out at Point Campbell and the road there from Point Woronzoff.

The day began wonderfully with a treetop view of the NORTHERN HAWK OWL. We later came back and got a slightly closer view, but not as close as I had seen this bird in December, 2015. Along the same road, we were delighted to also find a NORTHERN SHRIKE also doing the treetop thing after it left the fence where we first saw it.

For the next couple of hours, we hiked across the bumpy ice and golden grass and along the icy edge of the water, hearing and occasionally seeing a flock of about 75 Common Redpolls, with probably a few Hoary Redpolls mixed in. Because they were never seen close and well, I decided not to add the latter bird to my year list yet. We also had a small flock of Snow Buntings flying low over the water’s edge. Although we tried to find the previously reported Townsend’s Solitaire, we were not successful in that. 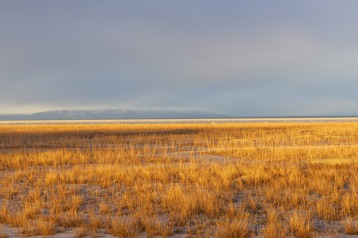 We went over to Aaron Bowman’s place, and along with him and his son, Hasan, drove our cars to a small park near the junction of Lake Otis and Tudor streets, where he had previously seen an American Three-Toed Woodpecker. On exactly the same spruce where he had previously seen the bird, we heard the tapping and saw the AMERICAN THREE-TOED WOODPECKER. While we were taking numerous pictures of the woodpecker, I also heard my first of the year RED-BREASTED NUTHATCH, a bird long overdue and one of my main yard birds. Of course, since I have not looked out on my yard for more than 1/2 an hour this year, it’s no wonder I had not yet seen one there. 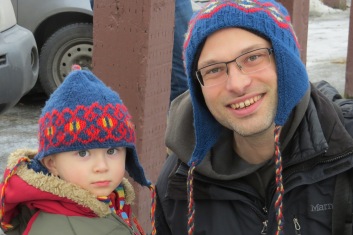 Our last try for a bird Aaron had seen recently was off Campbell Airstrip Road where a Spruce Grouse male was apparently on territory. After walking the very icy, hilly trail, we finally got to where he had seen the grouse. It was totally quiet with the only birds being Common Ravens high in the sky heading to their nighttime resting spots. We walked the trails around a trail intersection but nothing. While we were standing at the intersection, I suddenly noticed that a SPRUCE GROUSE was strolling up the trail toward us. The grouse finally got within a couple of feet of us, circled around, pecked at my walking stick that was lying on the ground, repeatedly approaching us clucking all the while. After we had taken many, many pictures (most of which show the back of the bird that we were looking down upon as he walked around our feet), we decided to leave, at which point the grouse started attaching Louann’s legs as she led us up the trail. After we had gone about fifteen feet, we apparently were out of the grouse’s territory and he just watched us leave. 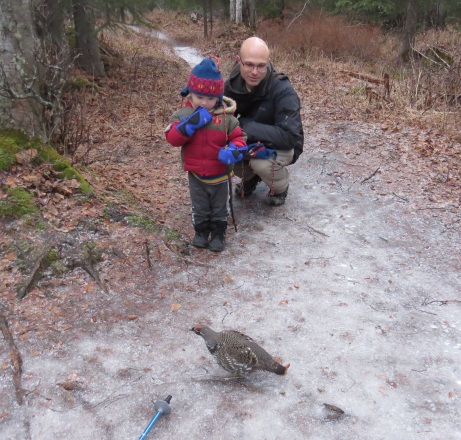 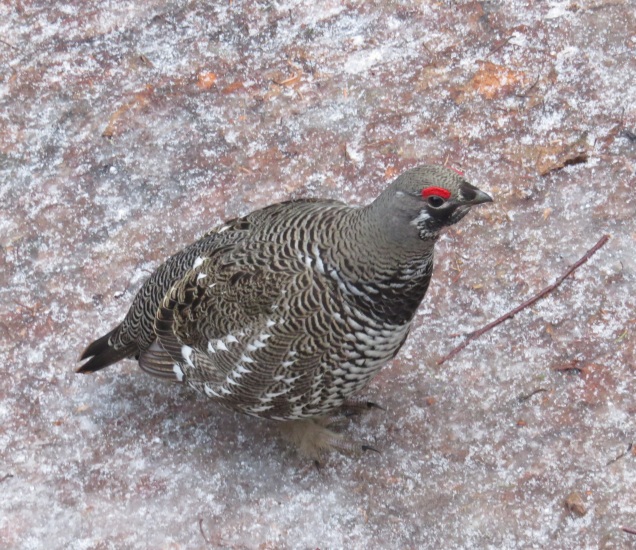 This Alaska big year has been wonderful so far! The birds (and the birders) have been most cooperative, and I am very grateful for all!