I had a short early morning flight from Juneau to Ketchikan and arrived there about 8:30 am. The predawn light over the mountain east of Ketchikan was beautiful to watch as we landed on the island airport. After I picked up my rental car I boarded the car-ferry to get to Ketchikan itself.

Because the road off the ferry required that I head south, I decided to bird south of Ketchikan first to look for (but did not yet find) Brandt’s Cormorants. My first new bird for the year was not too  exciting – a flock of EUROPEAN STARLINGS swirling around above the street as I left the ferry. More appreciated were the MARBLED MURRELETS most of which were swiftly flying low over the water. Some of them did sit on the water as did a modest number of Common Murres. In my search for the cormorants I pulled over every possible place that a car could fit along the road whenever the water was visible. There were a small number of Double-crested and Pelagic Cormorants and  also Pacific and Common Loons, Harlequin Ducks, many Common Mergansers and a few Red-neceked Grebes. 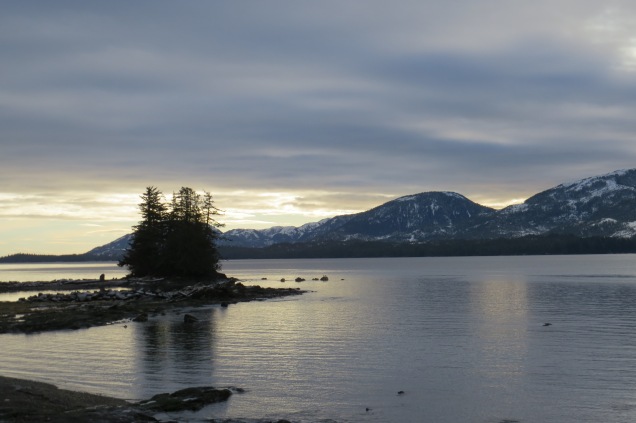 After a brief lunch, I headed north of Ketchikan to mostly frozen Ward Lake where Steve Heinl had told me that a Pied-billed Grebe was still hanging around in the decreasing area of open water. With my little rental car I was feeling decidedly nervous on the totally icy road that first went up and then went down, down toward the lake. I was happy to see a few cars by the lake, as I envisioned slipping off the road or being unable to climb back out of the area. I was very happy to see the PIED-BILLED GREBE bobbing along in the narrow stretch of water just beyond a small group of ice skaters.

After returning to the main road I went farther north, stopping wherever there were water overlooks. Way out on the water viewed from Totem Bight State Park, I found my goal, about 40 WESTERN GREBES. Other birds seen in that general area were Red-breasted and Common Mergansers, Surf Scoters, Barrow’s and Common Goldeneyes, Buffleheads, Mallards and the omnipresent Bald Eagles.

When I checked into my motel, I was glad to see that my window looks out on the water. There were many Common Mergansers, Long-tailed Ducks and Surf Scoters amid the gulls on the water but the light was rapidly going so I could not tell if there were any unusual birds out there. Maybe tomorrow. 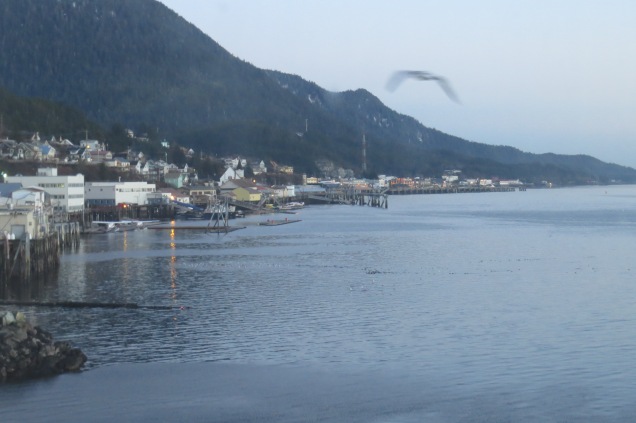