The plan had been to fly to Juneau on the night of the third and I tried to do that. But plane mechanical problems and fog in Juneau meant that the airlines flight was cancelled and we were told to rebook for the next day. After standing in one of the long lines to rebook, I went to baggage claim and got my suitcase, called the shuttle so I could get to my car, and drove home. There I spent much of the next hour talking to rental car and motel people to explain why I was not in Juneau and to change my reservations. I then had to cancel and rebook a seaplane flight to Hoonah where I hope later this week to look for and find the Brewer’s Blackbird that has been there for a while.

This morning I got to the Anchorage airport for my 8 am flight to Juneau and was told there was a chance it wasn’t going, again because of fog, and even if it went, it might not be able to land. Happily, the plane did get to Juneau and circled for only about 20 minutes while the fog cleared enough for landing. 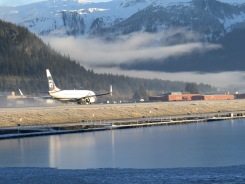 Until fog rolled in this afternoon, it was a beautiful blue-sky, snow-capped mountain day. By mid-morning I was out at the Dike Trail at the Mendenhall Wetlands State Game Refuge. I did not (today anyway) find my goal – Western Meadowlarks that apparently have been wintering there, but I was able to add Great Blue Heron to my year list (two of them).

There were very few birds around, other than Bald Eagles, Common Ravens, a distant large flock of Canada Geese, gulls (none of which appeared to be sufficiently interesting to spend time studying), and a couple of Buffleheads. There was a very territorial Song Sparrow that chirped and hopped near me as if irritated by my approach along the trail and a small flock of Dark-eyed Juncos.

As I walked to the end of the trail, I kept scanning for birds, and noted a small bird sitting on a spruce tree top behind me a long way back along the trail where I had walked past. On my return along the trail, I looked for the small bird, and it was still there. I took a distant photo, and it sure looked like a small owl! I love owls and this was very exciting! I kept taking pictures as I approached. The owl appeared to be hunting, and made a couple of short flights from treetop to treetop. I was delighted to see that it was a Northern Pygmy-Owl, a new bird for the year and for my Alaska state list.

I’ve got another day tomorrow to search the area. I may also try a little owling in the area tonight and/or tomorrow night.