My second day on Kodiak Island was another very windy day. Although there were still periodic showers, the heavy rain stopped by about 10:30 and we saw a few glimpses of the sun.

The island continued to produce new birds, most of which were very, very welcome, but not surprising. With the able guidance and aided by the keen hearing of Donna Hurley, I was able to add 12 new species to my year list before it was time to fly back to Anchorage in the late afternoon.

The first new birds seen today at the feeders of a friend of hers were ones that are also quite common around Anchorage – Brown Creeper, Pine Grosbeak, Pine Siskin and Dark-eyed Junco, plus Black-capped Chickadees and Red Crossbills seen yesterday.

After that we headed to the Trident Basin floatplane facility where there was a flock of about 17 Black Oystercatchers, a handful of Pelagic Cormorants, a Pigeon Guillemot, and our first Black-legged Kittiwake of the day, in addition to other ducks already seen. 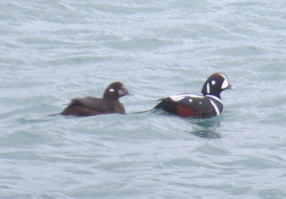 Way across Buskin Lake we saw two Redheads in a flock with other ducks. There were large flocks of Greater Scaup on the lake as well as both goldeneyes. The spruce trees in that area produced a few Golden-crowned Kinglets that called and flitted across the road, and a long-tailed Sharp-shinned Hawk came nearly over us and disappeared into a spruce grove slightly up a  nearby hill.

At another area of the lake was a huge flock (175-200) Green-winged Teal and a couple of Northern Pintails.

At our last stop in the gray, low visibility afternoon was a distant mixed gull flock, with a couple of very small mystery gulls with pinkish legs. A chattery Pacific Wren was my last new bird of the day. 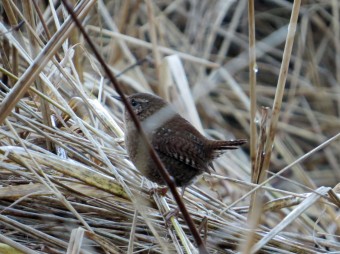 In a little under 24 hours I will be beginning a trip to Juneau, Ketchikan and Hoonah – looking for new birds of course!