While it was still quite dark this morning (8:53 a.m.; temperature just under freezing), I glanced out into the back yard and thought there seemed to be something dark in the feed dish on the grass where I periodically put cracked corn. My binoculars revealed a Mallard eating corn, and then I saw that there were more, 8 more to be exact, out in the grass. They had been gone since early summer when ducks were nesting, food was plentiful elsewhere and water was unfrozen. The young ones can now fly, lakes are freezing and the ducks are looking for food sources. The first I ever had them in the yard was midwinter earlier this year when the snowbanks were high. It may be a mixed blessing that they have re-discovered the yard so early in the winter, because they will probably bring their hungry friends as it gets colder. Note: the white circle on the ground in the picture below is frozen ice that I removed from a water dish a couple of days ago when the temperature was in the high 40s, which is unlikely to occur again until April or later I expect.

The Pine Grosbeaks that returned recently are still around periodically most days. Yesterday morning there were six (3 females, 3 males), and yesterday afternoon there were four females and one male. This morning there was a pair. 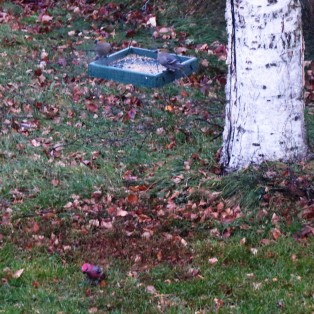 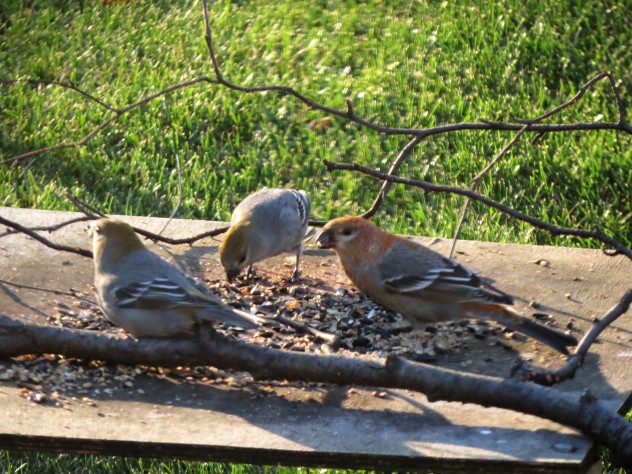 There are fewer woodpeckers around now than in the summer, but today there was a Hairy Woodpecker and two Downy Woodpeckers. I managed to catch one of each in a couple of photos. 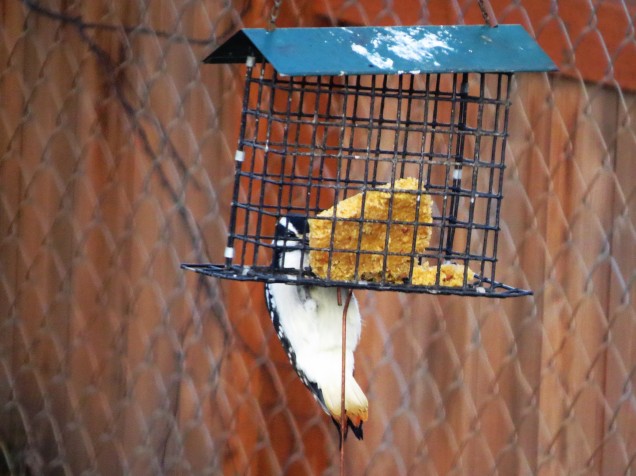 Not all birds returning to my yard for the winter are deemed equally welcome. After the Mallards had departed (about 9:25), I was looking around and saw that two of the many starlings that were around in great numbers before summer were back. They snarf up everything and seem to be impossible to discourage.